Education must be holistic by integrating head, heart and hands as these youngsters will foster a humane society Certification at the House of Commons, United Kingdom for her exemplary contribution in the field of education. The distinguished forum was presided over by Baroness Sandip Verma, chair of UN Women National Committee United Kingdom, member of the European Union Committee.

While addressing the forum, Mrs Krishna Bhati, Principal, then heading Maharaja Sawai Man Singh Vidyalaya said, “Education must be holistic by integrating head, heart and hands as these youngsters will foster a humane society. Our children have picked up various art forms and we showcase the creativity of our children through exhibition, whether it's blue pottery, textile designing, wood-work, sculpture-making and many such art forms”

Based in Jaipur City, a place of heritage, she conceptualized a framework called “five ‘E’s in Pre-vocational SUPW ( Socially Useful Productive Work ) classes”. As she explained, “We start with the first ‘E’ where we get the children to explore through orientation, whatever possible vocation, whatever possible craft they can relate to, and once we get them to explore various crafts we get them to exchange ideas and that gives us the second ‘E’. The third ' E' is for exposure to work under tutelage of various artisans where children learn how the artisans earn. Then comes the fourth 'E' where students pick up skills hands- on from the artisans & their work which becomes Experiential Learning. Finally, the fifth 'E' brings them to the point of Exhibition of their handiwork culminating into Heritage Education on the Ramp.”

She propagates heritage art as an essential component of Skilling India through vocational education in schools. Her expertise lies in integrating various art forms into mainstream school education.

Krishna Bhati has been recognized as an educationist par excellence through numerous awards and accolades. She was bestowed with the prestigious “Rajasthan Gaurav Award” for demonstrating excellence in school leadership in 2016 and felicitated by H.H. Rajmata Padmani Devi of Jaipur. The school under her headship was ranked “No. 1 in Leadership” in the country in 2015 by Education World Magazine. She has worked in the leading schools of the country demonstrating her ability to achieve student learning outcomes, accelerate institutional growth and pioneer innovations in teaching-learning processes. She is passionate about making education child-centric, highly inclusive and value driven. 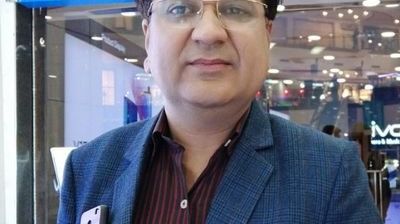