Everybody has heard about Rashtriya Swaymsevak Sangh (RSS).  For many it is the inspiration behind the ruling party of India, Bharatiya Janata Party. But very few people in India are familiar with the name Dr Keshav Baliram Hedgewar who founded the RSS, 92 years ago.

There are not many individuals like Dr Hedgewar who cast a long spell on the country’s history and its political destiny, established an organization which arguably is the largest and most enduring in the world, advanced a new ideological narrative which large sections of the society have adopted and yet remained oblivious to the general public. Dr Hedgewar was such a personality who let his creation speak rather than pushing himself to the front. He was the founder of Rashtriya Swayamsevak Sangh, popularly known as RSS and led the organization as its first Sarsanghachalak (Chief) for  fifteen  years, till he passed away in 1940. He anointed his successor, Shri Guruji M S Golwalkar who in the next three decades took the RSS into every nook and corner of India.

Dr Hedger led an eventful life. As a child he was a sparkling dynamo of patriotism, who openly denounced the British imperialism. Even before he entered his teens he had vocally boycotted the celebrations of the Diamond Jubilee Celebrations of Queen Victoria and the coronation of Edward VII. As a youth he became a rebel and revolutionary, joined the Congress to become its provincial secretary and left it fed up to start his own organization and moulded a generation of like-minded patriots all over the country by the time he breathed his last at the age of 51. He insisted on working silently without seeking publicity and with the belief that unnecessary publicity would derail his mission. Yet he lived a high profile life.

He was close to Lokmanya Balgangadhara Tilak, Congress leader Dr Moonjee, and met Mahatma Gandhi and shared the dais with him at a large RSS function at Wardha in 1934, held discussions with Gandhiji on the future of polity in the country. He was equally close to Netaji Subhas Chandra Bose, explained to him in a series of meetings about his idea of India that he wanted to build through the Sangh. Is it not surprising that despite rubbing shoulders with the most popular leaders in the country, pushing a resolution at the 1920 Nagpur Congress which was attended by Gandhiji, where he got cow protection as part of the Congress agenda with Gandhiji’s consent Doctorji, escaped limelight?

For, Dr Hedgewar was a nation builder, a visionary, a thinker and a moulder of human minds all rolled into one. The fact that he was born on Varsha Pratipada , Indian New Year day on April 1, 1889 has given a  new meaning to that day. The RSS was born on Vijayadasami in 1925 September when Doctorji was 36. He was born in Nagpur as the fifth child of his parents. As a brilliant student he completed his LMS degree and could have started a lucrative medical practice. But he plunged into public life, remained a bachelor and worked tirelessly to spread the organization he founded. Late RSS leader H V Seshadri in 1988 wrote a book, RSS: A Vision in Action. In this book Shri Seshadri summed up the RSS work as keeping the spirit of freedom, facing internal threats to national unity, strengthening national morale and meeting the threat of conversion by inducement, striving for social harmony, social justice, helping people facing natural calamities and espousing nationalist, value based education and character building. RSS sees politics and power as means to achieve this goal.

In nine decades since Dr Hedgewar founded the organization, it has become the largest non government initiative with about sixty affiliates working in all spheres of national life and the ruling party with a membership strength of 11 crore is an off-shoot of the Doctor’s dream project.

Dr Hedgewar did not believe in the power of money or position to expand his work. He shunned publicity. But he believed in the goodwill and blessings of national leaders like Netaji, Tilak and Gandhiji in testing the ideological resilience of his creation. Hence in   1928, he invited Vithalbhai Patel to address a gathering of Sangh workers in Mohite Wade Shakha in Nagpur.  Same year Dr B R Ambedkar visited a Sangh Shakha in Pune. Both leaders hailed the great work Dr Hedgewar was doing. Gandhiji was much impressed by the social harmony and eradication of caste in the Sangh when he visited the Wardha camp on December 24, 1934. Hedgewar had a long meeting with Gandhiji during this visit.  Participating in non cooperation movement, freedom struggle and anti-Cow Slaughter agitation, Dr Hedgewar went to jail thrice. His jail terms were also turned into spreading the message of RSS to political prisoners in Jail.

In 1938, as Congress president and again in 1939 and 1940, Netaji Subhash Bose was in touch with Dr Hedgewar.  On June 19, two days before Doctorji breathed his last, Bose went to see him. Then the two could not speak as he was terribly ill. On June 21, 1940 Doctorji passed away.

After starting the Sangh Dr Hedgewar never knew what rest and comforts were. For many years the Sangh functioned without office and office bearers. On Vijayadasami, in 1925 the Sangh was started as a meeting of a few dozen like-minded youngsters who worshipped the Motherland and pledged their lives for the safety and glory of Bharat. For years homes of well-wishers and supporters became the offices of the institution. Sangh never collected funds for itself. It was truly voluntary work of the supporters.  Sacrifice was at the core of Hedgewar’s philosophy.

Dr Hedgewar devised a novel, unique and livewire methodology of connecting and correlating with people. He proved a master strategist, theoretician and motivator of millions of people to forget personal gains and comfort for the national cause. This is the secret of his successful mission. Future generations will judge him as the greatest ever patriot and unifier that India has ever seen.

Dr R. Balashankar is former Editor of Organiser Weekly. He is a well-known writer and political analyst, having worked in senior positions in magazines including The Week, Probe, and Onlookerand newspapers including Financial Express and Free Press Journal. He has authored thousands of articles, on economics, politics, and development. He has interviewed nearly all the towering political personalities and giant of men. His book reviews, much appreciated, have been published and cited in several publications. His articles have been published in Times of India, Hindustan Times, Indian Express, Sunday Guardian, Asian Age. 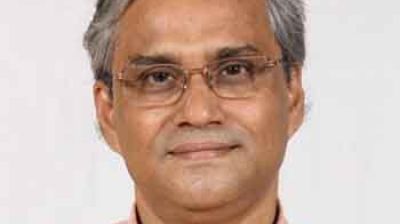