MGM Healthcare, a super-specialty quaternary care hospital in the heart of Chennai, Tamil Nadu, has pulled off yet another successful green corridor transfer of a donor heart from Visakhapatnam to Chennai. Dr K R Balakrishnan, Chairman - Cardiac Sciences and Director - Institute of Heart and Lung Transplant and Mechanical Circulatory Support at MGM Healthcare, and his team of transplant specialists including Dr Suresh Rao K G, Dr Srinath V, and Dr Ganapathy Subramaniam successfully performed the heart transplant on a 63-year-old woman from Mumbai.

MGM Healthcare received an alert on Sunday morning about a 33-year-old brain dead male patient (blood group: O +ve) at a private hospital in Visakhapatnam, who was an organ donor. The cause of brain death was reported to be an Intracranial Haemorrhage.

MGM Healthcare immediately confirmed the requirement for a 63-year-old woman who was diagnosed with ischemic cardiomyopathy, a condition where the heart muscle is weakened as a result of a heart attack or coronary artery disease. Despite previous attempts of stenting, the procedure was unsuccessful and the patient went into heart failure, requiring a heart transplant.

The Traffic Police Departments in both Visakhapatnam and Chennai opened ‘Green Corridors’ for road travel from the private hospital in Visakhapatnam to the airport, and from Chennai Airport to MGM Healthcare, Nelson Manickam Road. Once the organ landed in Chennai at around 1:27 pm, it was given priority exit from Gate 3 with the CISF’s support. The ambulance with the donor organ reached MGM Healthcare from Chennai Airport in just 19 minutes, which under normal traffic conditions would have taken anywhere between an hour to an hour and a half to cover.

Speaking on the occasion, Dr Prashanth Rajagopalan, Director, MGM Healthcare said, “It’s indeed a proud moment for MGM Healthcare; with yet another successful heart transplant done by Dr K R Balakrishnan and his team. We are thankful to the Traffic Police Department, Airport Authorities and last but not the least, the common man commuting on the city roads for being co-operative and supportive.”

The woman was registered on the National Organ and Tissue Transplant Organisation (NOTTO) waiting list. Post-registration, she was waiting for a suitable donor. Once the deceased patient in Visakhapatnam was identified based on medical compatibility, the recipient was informed about the possibility of a transplant and was prepped. 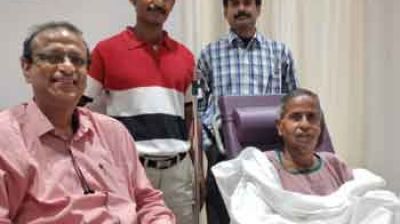