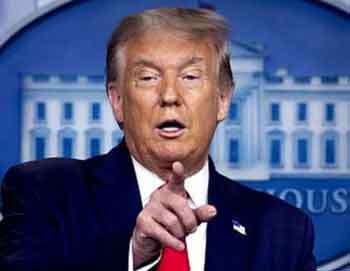 He loved looking at my body. My body was very strong.

According to a report, former US President Donald Trump also claimed that Jackson had told him that he was the ‘healthiest president ever.’ Trump said that Jackson had said in 2018 that Trump was completely healthy for his age, but he advised him to lose 10 to 15 pounds. Let us tell you that recently the former President had once again indicated to present his candidature in the 2024 elections. He said, ‘We might have to do it again.’

Trump made this statement amid applause at a meeting organized by a group of former White House officials and cabinet members. It is believed that the purpose of the meeting was to prepare an agenda for Trump’s re-election.

Former President Trump arrived in Washington for the first time since Joe Biden took office on January 20, 2021 and said goodbye to his own White House. Trump spoke hours after former Vice President Mike Pence’s speech. Pence is seen as a potential rival for Trump in the 2024 election. PLC/GT

After Muslims, the BJP is trying to get the support of the Church and the Christian lobby to increase the base

Congress crisis: Chidambaram said that I do not know how many MLAs will support Sachin Pilot

Crisis for the post of Congress President: Digvijay joined the race for President