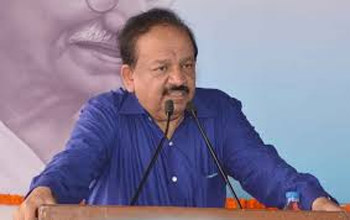 INVC NEWS
New Delhi,
In view of the recent assault on doctors in West Bengal, Dr. Harsh Vardhan, Union Minister for Health and Family Welfare today wrote a letter to the Chief Ministers of all States and UTs drawing their attention for strict action against any person who assaults doctors.

Expressing deep concern over the recent act of violence against doctors, the Union Health Minister stated that incidents of assaults on doctors are reported from different parts of the country and this leads to sudden strike by doctors, gravely affecting the healthcare services. “Resident doctors in many parts of the country are agitating and not providing healthcare services. Agitations by doctors in West Bengal seem to be getting aggravated and taking shape of strike by both Government and Private sector doctors, all over the country”, he wrote. Representatives from the Indian Medical Association (IMA) and Delhi Medical Association (DMA) also called on Dr. Harsh Vardhan today.

Stressing further on the need for avoiding such incidents in future, Dr Harsh Vardhan said that the law enforcement should prevail so that doctors and clinical establishments discharge their duties and professional pursuit without fear of any violence. “Strict action against any person who assaults them, must be ensured by the law enforcement agencies,” he emphasized.

In his letter to the Chief Ministers, Dr. Harsh Vardhan cited a letter (dated 7th July, 2017) sent by the Union Health Ministry to all Chief Secretaries of States which contains the decision taken by an Inter-Ministerial Committee constituted under Ministry of Health to review the issues raised by IMA. The Committee, in its report, recommended that the Health Ministry shall suggest to all State governments which do not have specific legislation to protect doctors and health professionals to consider one to strictly enforce the provisions of special legislation wherever they exist or enforce the IPC/Cr.PC provisions with vigor. “The Indian Medical Association (IMA) has raised this concern many a time. Since ‘Police’ and ‘Public Order’ are State subjects, Government of India, on many occasions has drawn attention of State Governments for an urgent need for a robust criminal justice system with emphasis on prevention and control of crime,” Dr Harsh Vardhan mentioned. A copy of the Draft Act i.e. “The Protection of Medical Service Persons and Medical Service Institutions (Prevention of Violence and Damage or Loss of Property) Act, 2017 provided by IMA was also circulated to the States vide the 2017 letter. The draft Act includes clauses on penalty and recovery in case of loss/damage to property.

Through his letter to the States, Dr. Harsh Vardhan has reminded the Chief Ministers and requested them to consider enacting specific legislation for protecting doctors and medical professionals, and has forwarded the Draft Act provided by IMA i.e. the Protection of Medical Service Persons and Medical Service Institutions (Prevention of Violence and Damage or Loss of Property) Act, 2017.

Dr. Harsh Vardhan further said that doctors form an important pillar of society and often work under stressful and difficult conditions. “Our doctors rank among the best in the world and work for long hours under stressful conditions, grappling with a huge load of patients. It is the duty of State to ensure safety and security of doctors who assure that the healthcare needs of the society are met,” he highlighted.