Disfigured by mobile phone blast in the mouth, 26-year-old Yemen man gets a new lease of life after Rare Surgery in India

26-year-old man from Yemen  was left completely disfigured after a mobile blasted in his mouth which he had  held between the teeth while working. Apart from severe disfiguring, the accident rendered him incapable to eat speak normally. Such an incident at so young age left him 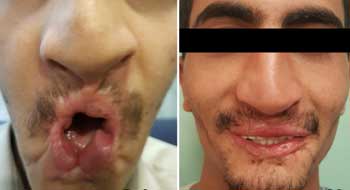 completely shattered and broken. But unlike many others who face such mishaps and keep on bearing the ordeal, this young man came to India to get the reconstruction surgery done.  Team of Reconstruction Surgeons headed  by Dr Ajaya Kashyap performed an rare surgical procedure to  give Saad, a 26 Year Old  man his normal features back .

The blast was so strong that it burnt the inside, tore up the muscles and the tongue leaving all the soft tissues damaged.

Dr Ajaya Kashyap, Medical Director, KAS Medical Centre and MedSpa,  New Delhi said "As the blast happened inside the mouth, the injury was rather unusual. After much assessment the team decided to use flaps of tissue from inside the mouth as well as fat tissues from his body and use it as a flap. Ensuring facial sensations was another challenge. We are happy that the procedure went well and patient regained his normal features," .

In rare reconstruction surgery by Indian Doctors the inside of the oral cavity was reconstructed using flaps from inside of the cheeks. The muscles of the lips which had been split apart were repaired and flaps were used to close it. Autologous fat with stem cells and PRP were injected to restore volume and improve scarring.

The surgery of Saad was done a week ago and now he is ready to fly back to his own country. By doing a successful reconstruction surgery along with keeping intact normal facial sensation, Indian doctors achieved a rare feat.

Dr Ajaya Kashyap, explaining further said “it was a kind of challenging case for us. Obviously, a reconstruction surgery was the only treatment. But driven by our technical proficiency and determination to help him, we went ahead to perform this complicated surgery,”

Sharing his experience in India and with Dr Ajaya Kashyap, Saad ( patient) said, “The blast had taken everything that was positive in me. unable to eat and speak, just a few months ago I was the most hopeless man. When we started off from Yemen , all I  hoped was to to get my normal features back . But what we actually received here is beyond expectations. For me, the surgery has changed everything. Now I can get settled in my life, without feeling insecure about my looks.”. I want to thank  Dr Kashyap and his team who gave me best possible treatment and now I am a normal and happy man again, who is ready to face the life,"