Home Business Career / Profession Difference between urban and rural areas is acceptable as long as there... 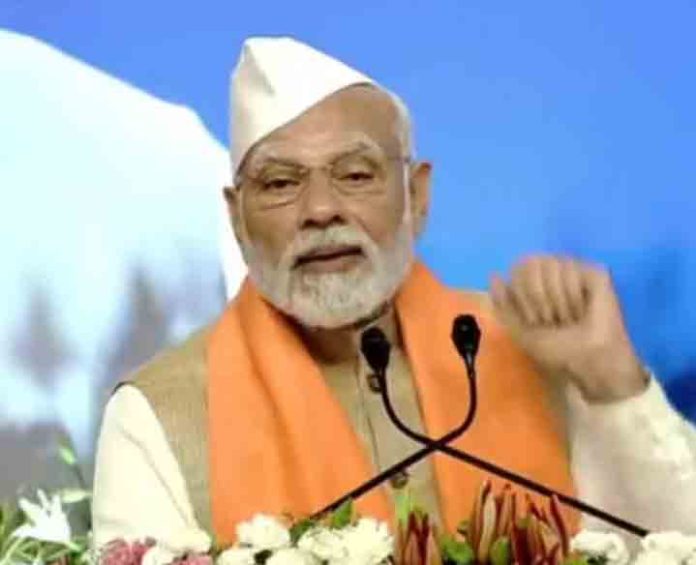 The Prime Minister, Shri Narendra Modi attended the 36th Convocation Ceremony of Gandhigram Rural Institute at Dindigul in Tamil Nadu today. More than 2300 students of 2018-19 and 2019-20 Batches received their degrees in the convocation ceremony. This was followed by the Prime Minister awarding gold medals to the winners and honoris causa to the deserving candidates.

Addressing the gathering, the Prime Minister said that coming to Gandhigram has been a very inspirational experience for him and recalled that the institution was inaugurated by Mahatma Gandhi. He remarked that one can witness the spirit of Mahatama’s ideals and ideas of rural development in the institution. The Prime Minister mentioned that Mahatma Gandhi’s ideals have become extremely relevant in today’s day and age, be it ending conflicts or climate crises, and his ideas have answers to many challenges and burning issues that the world faces today.

The Prime Minister highlighted that the students of the Gandhian way of life have a great opportunity to make a huge impact and pointed out that the best tribute to Mahatma Gandhi is to work on ideas close to his heart. The Prime Minister gave the examples of ‘Khadi for Nation, Khadi for Fashion’ that revived the neglected and forgotten fabric after a long time. He informed that in the last 8 years, the sales of the Khadi sector saw an increase of over 300%. “Khadi and Village Industries Commission clocked a record turnover of over Rs 1 lakh crore last year.” He continued, “Now, even global fashion brands are taking to Khadi due to its eco-friendly characteristics. “This is not a revolution of mass production but a revolution of production by the masses.” Recalling how Mahatma Gandhi saw Khadi as a tool of self-reliance in villages, the Prime Minister said that the government is inspired by him, as we are working towards Aatmanirbhar Bharat. “Tamil Nadu was a key centre of the Swadeshi movement. It will once again play an important role in Aatmanirbhar Bharat”, the Prime Minister added.

The Prime Minister emphasised the need to understand Mahatma Gandhi’s vision of rural development and said that he wanted villages to progress conserving the values of rural life. Shri Modi mentioned that the vision of the government towards rural development draws inspiration from Mahatma Gandhi’s ideals. He highlighted that the difference between urban and rural areas is acceptable as long as there is no disparity. Giving examples of complete rural sanitation coverage, tap water to over 6 crore homes, 2.5 crore electricity connections, and increased rural connectivity through roads, the government is taking development to the people’s doorstep and rectifying the inequality that existed between urban and rural areas.

Recalling that sanitation was a concept very dear to Mahatma Gandhi, the Prime Minister gave the example of Swachh Bharat. He further added that the government is not stopping at delivering the basics but connecting the villages with the benefits of modern science and technology. The Prime Minister informed that 6 lakh kilometres of optic fibre cable have been laid to connect nearly 2 lakh gram panchayats.

Stressing the need for sustainability in rural development, the Prime Minister said that the youth need to provide leadership in such areas. “Sustainable agriculture is crucial for the future of rural areas”, he remarked and highlighted the great enthusiasm for natural farming. “Our organic farming scheme is doing wonders, especially in the Northeast,” Shri Modi pointed out. He also informed that the government came out with a policy related to natural farming in last year’s budget. He also stressed the need to save agriculture from mono-culture and revive native varieties of grains, millets and other crops.

Recalling the observation of Acharya Vinoba Bhave, Shri Modi said that elections for village-level bodies tend to be divisive, the Prime Minister gave the example of the Samras Gram Yojana that began in Gujarat. He informed that villages that chose leaders through consensus were given certain incentives which resulted in reduced social conflicts.

Recalling the time when thousands of villagers came to a train to have a glimpse of Gandhi Ji the Prime Minister said that Mahatma Gandhi fought for a united and independent India and Gandhigram itself is a story of India’s unity. “Tamil Nadu has always been the home of national consciousness,” he said and recalled when Swami Vivekananda received a hero’s welcome on his return from the west. Mentioning Late General Bipin Rawat, the Prime Minister remembered hearing the chants of ‘Veera Vanakkam’.

The Prime Minister drew everyone’s attention to Kashi Tamil Sangamam which is going to take place in Kashi soon and said that it will celebrate the bond between Kashi and Tamil Nadu. “This is Ek Bharat Shreshtha Bharat in action. This love and respect for each other is the basis of our unity”, he remarked.

Recalling the sacrifices of Rani Velu Nachiyar, the Prime Minister mentioned that she stayed here while she was preparing to fight the British. “Today, I am in a region which has seen the power of Nari Shakti. I see young women graduating here as the biggest changemakers. You will help rural women succeed. Their success is the nation’s success.” he remarked.

Be it the world’s largest vaccine drive, food security for the poorest, or being the world’s growth engine, the Prime Minister said that India has been a bright spot at a time when the world faced the worst crisis in a century. “The world expects India to do great things. Because India’s future is in the hands of a ‘Can Do’ generation of youth.” The Prime  Minister continued “Youth, who not only accept challenges but also enjoy them, who not only question but also find answers, who are not only fearless but are also tireless, who not only aspire but also achieve.” The Prime Minister concluded, “My message to the youth graduating today is – You are the builders of New India. You have the responsibility of leading India for the next 25 years in its Amrit Kaal.”