Developmental works are being done in Loharu 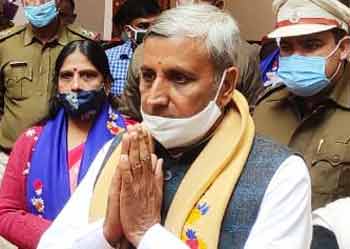 INVC NEWS
Haryana,
Haryana Minister for Agriculture and Farmers’ Welfare, Sh. J.P.  Dalal said that vegetable market and grain market will be expanded in Loharu. Apart from this, the work of the Railway Over Bridge and the bypass of Dhigawa will also be started soon.

Sh. J.P. Dalal conducted a surprise inspection of several projects under construction, including the Government College for Girls to be built at a cost of Rs 17 crore. He said that developmental works worth about Rs 250 crore are being done in Loharu. During the inspection he said that all the projects should be completed before the stipulated time so that people can avail their benefits on time. In addition, emphasis should be laid on the quality of developmental works.

Sh. J.P. Dalal said that a workshop of Haryana State Transport Loharu to be built at a cost Rs 4.5 crore, Centre for Excellence under Indo-Israel Technology to be built at a cost of Rs 10 crore in Gignaw, Teaching Block to be built in Loharu Polytechnic Institute at a cost of Rs 11 crore, development of Loharu city at a cost of 35 crores and water works under construction to provide drinking water supply in three villages of Loharu. He said that the areas facing scarcity of canal water will be provided irrigation facilities by through Micro Irrigation Scheme.

He informed that under the Mahagram Yojana, Rs 50 crore will be spent on clean drinking water and sewerage in Barwas, besides this, independent water bodies will be constructed in villages like Obra and Nunsar etc. so that there is shortage of drinking water in any village.

After this, the Minister of Agriculture visited Bahal and heard the problems of the people and gave necessary instructions to the officers concerned. On this occasion officers of Public Health Department, Superintendent Engineer, Sh. Jaswant Singh Narwal, Executive Engineer, Sh. Rahul Berwal and Sh. Somvir Singh Dahiya and SDO Sh. Chananmal were present on the occasion.