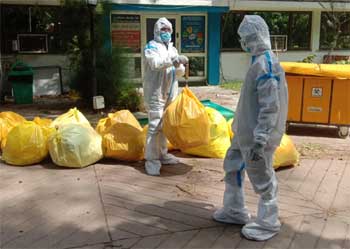 Ingersoll-Rand Supports India in its Fight Against Covid 19

Ingersoll-Rand continues to support essential service industries like Hospitals, Medical Equipment, Pharmaceutical, PPE manufacturing companies, Food and Beverages during the lockdown: deploys dedicated teams to ensure running of air compressors critical to the functioning of these industries
Creating sustainable campaigns on educating employees about their safety and hygiene measures at work and at home

Ingersoll Rand, a world leader in creating comfortable, sustainable and efficient environments, has through its group companies in India (“Ingersoll Rand”) extended its support to the government of India in its ongoing fight against COVID 19 by supporting critical industries and manufacturing units. The group is adhering with the government of India’s health and safety guidelines- to support the functioning of critical industries like Hospitals, Medical Equipment, Pharmaceutical, PPE manufacturing companies, Food and Beverages. Ingersoll – Rand (India) Limited has announced that it has donated a total sum of INR 1crore towards the Prime Minister’s Citizen Assistance and Relief in Emergency Situations (PM Cares) fund; the announcement is part of Ingersoll Rand’s community relations initiative.

As a voluntary drive, Ingersoll Rand employees have also contributed a part of their salaries, adding up to a total of INR 6 lakhs, for this novel initiative.

Ingersoll-Rand’s dedicated teams have been working round-the-clock to support its customers across critical industries like Hospitals, Medical Equipment, Pharmaceutical, PPE manufacturers, Food and Beverages through the lockdown period enabling them to function without hassle. With the new norms of allowing opening of manufacturing units with a limited staff, Ingersoll Rand has its factories functioning across India to ensure a quicker turn-around.

Safety of employees a priority

Ingersoll-Rand is driving awareness campaigns for its employees across India to help them join office and factory units without any anxieties or worries. The company is also sending regular communication to guide employees to adopt best hygiene practices to remain safe.

Abiding by the government of India and WHO’s guidelines, Ingersoll Rand is ensuring social distancing and the availability of PPE kits for the employees across the manufacturing units and offices.

Commenting on the initiative, Amar Kaul, Chairman and Managing Director, Ingersoll-Rand (India) Limited said, “As a responsible and committed corporate, we have always tried to support the right causes that directly impact people at large- be it collaborating with NSDC or working with organizations like SMILE Foundation and Akshaya Patra Foundation. In these tough times, it is important for corporates and people to come together and work with the government in its efforts to curtail Covid 19. While our teams work around the clock to support these critical industries, we are hopeful that the total donation of INR 1.06 cr. will further aid the government in its immediate relief measures for the people in need.”