Home Politics Congress Crisis for the post of Congress President: Digvijay joined the race for... 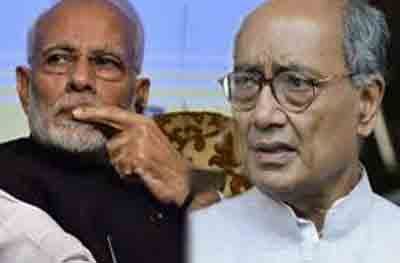 Crisis for the post of Congress President: Digvijay joined the race for President. There was a stir in Madhya Pradesh as soon as the name of former Chief Minister Digvijay Singh came in the race for Congress President. His supporters are excited. At the same time, former minister Sajjan Singh Verma said that the hand that gives energy and strength to all the names that are going on is of Rahul Gandhi.

The high command should decide to hand over the command of the party to him. Former Chief Minister Digvijay Singh is overseeing the organization of India Jodo Yatra of former party president Rahul Gandhi. He had said recently that I am not interested in becoming the president. We all want Rahul Gandhi to take over the reins of Congress but he is not ready for this. The name of Rajasthan Chief Minister Ashok Gehlot was being considered fixed for the post of President, but after the developments that happened, Digvijay Singh’s name came up again.

He had said that according to what has been decided in Udaipur Chintan Shivir, a person can stay in only one post. His indication was clear that if Gehlot becomes the president, he will have to leave the chief minister’s post. After this the statement of Rahul Gandhi also came to the fore.

The party had also sent central observers but instead of becoming a thing, things got worse. In the changed circumstances again Digvijay Singh’s name has come up for the post of President. It is being told that they can file nominations on 30 September. Although his supporters have not received a clear indication of this, they are excited and are claiming that the organization will be stronger if he becomes the president.

He has been the state Congress President and the way he toured Madhya Pradesh at that time, the result was seen in the 1993 assembly elections. He had done Narmada Parikrama and then Sangat in Sangat (a program of dialogue with workers) before the 2018 assembly elections, which benefited the party. The party has also made him in-charge of other states including Uttar Pradesh.

On the other hand, Sajjan Singh Verma, who was the Public Works Minister in the Kamal Nath government, said that all the names, including Digvijay Singh, Malikarjun Kharge, Mukul Wasnik, are coming up, the hand that gives them energy and strength is from Rahul Gandhi. In view of the kind of development that has happened now, Rahul Gandhi should be handed over the command. The high command should come forward and announce them. When they file nomination papers, no other name will come up. PLC/GT