Home Other Indian State News Criminals can be wiped out from Indian politics – Supreme Court seeks... 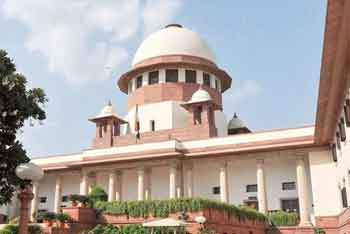 The Supreme Court on Wednesday issued notice to the Center on a PIL seeking to bar all those against whom charges have been framed from contesting elections, as per a Law Commission report. The petition, filed by advocate Ashwini Upadhyay, sought a direction to the Center and the Election Commission to take steps to prevent those against whom charges for serious offenses have been framed from contesting elections.

After hearing Upadhyay’s arguments, Justice K.M. Joseph and Hrishikesh Roy sought answers from the Law and Justice and Home Ministries and the Election Commission.

The petition has sought a direction to the Election Commission to amend the Election Symbols (Reservation and Allotment) Order, 1968, to exercise its full power conferred under Article 324, putting such condition (restriction) on the contestants.

According to the petition, “There has been a 44 per cent increase in the number of MPs with declared criminal cases since 2009. Similarly, 159 (29 per cent) winning leaders in the Lok Sabha 2019 elections have declared serious criminal cases, including cases related to rape, murder, attempt Cases have been announced.”

“Since 2009, there has been a 109 per cent increase in the number of MPs with serious criminal cases,” the petition said.

The petitioner argued that the consequences of allowing criminals to contest elections and become MLAs are extremely serious for democracy and secularism.

“The criminalization of politics is at its peak and the political parties are still fielding candidates with serious criminal background, hence causing great harm to the people,” the petition said.

It further argued that by raising the threshold for framing of charges, the chances of unfairly imposing false cases on the candidates would be significantly reduced. PLC/GT