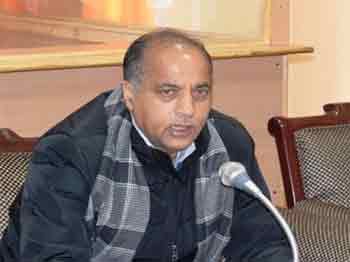 INVC NEWS
Shimla,
Chief Minister Jai Ram Thakur while presiding over a meeting with the officers of the Kullu district administration to review progress on various schemes at Kullu today directed to complete all the ongoing developmental projects in a stipulated time frame.

He said that the Bhutnath bridge of Kullu, which was closed for traffic since last two years should be restored for traffic at any cost in March, 2021 as it was one of the important bridge and people were facing problems. He asked the Public Works department to fix the responsibility and take action against the erring contractor and engineers who were responsible for substandard construction of this bridge.

Jai Ram Thakur directed to start the work of Rs. 162 crore sewerage projects for Manali town and surrounding villages for which the pipes worth Rs. 21 crore had already been purchased. He asked the officers of the Jal Shakti Vibhag to ensure completion of this project in fixed time frame.

Expressing his dissatisfaction over the unnecessary delay in the construction of two blocks of civil hospital Banjar, the Chief Minister directed to complete this work by January, 2022 positively. He directed the Deputy Commissioner to monitor progress on all the ongoing projects so that unwanted delays due to small reasons could be avoided.

The Chief Minister said that the work on Banjar by-pass should be started at the earliest as the state government had already approved a sum of Rs. 734.40 lakh for this project. He also directed to complete all the codal formalities to pave the way for construction of a modern auditorium at Rambag in Manali where big events like winter carnival could be organised.

Jai Ram Thakur directed to complete the work on multipurpose block of the Deputy Commissioner’s office within a year on which Rs. 549 lakh were to be spent. He said that the work on construction of Kullu bus stand was in final stage and would be dedicated to the people in the month of March this is year.

He appreciated the efforts of the district administration and health department for taking effective steps to combat Covid-19 pandemic in the district.  He expressed happiness that the Covid cases had come down sharply in the district and presently there were only 10 active cases in the entire district.

Education Minister Govind Singh Thakur said that construction of an auditorium in Manali town would facilitate in organising various activities in a better way.

MLA Banjar Surender Shourie urged the Chief Minister for early construction of Banjar by-pass and a bridge over it.