Home Health Covid 19 has led to an unprecedented disruption in election schedules all... 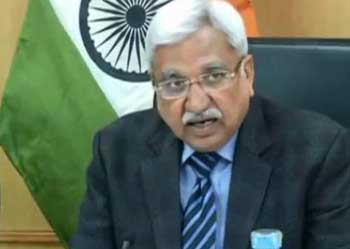 Chief Election Commissioner Shri Sunil Arora in his inaugural address said that the Covid 19 has led to an unprecedented disruption in election schedules all over the world and while the challenges for conducting elections were numerous, it also has presented an opportunity that brought Election Management Bodies together to share and learn from each others’ best practices. Adding further, Shri Arora also touched upon ECI’s experience of conducting elections to the Bihar Legislative Assembly during these tough and testing times. Sh Arora stressed that the objective of the Election Commission amidst pandemic is to conduct free, fair, transparent, robust and safe elections.

On the sidelines of IEVP 2021, the Chief Election Commissioner also released the maiden issue of A-WEB Journal of Elections today. Shri Sunil Arora while releasing the journal, emphasized that this academic journal would bridge the gap between academics and practice in electoral landscape. He further added that this scholarly journal is aimed at specialists, researchers and experts. He also appreciated the tremendous support received from Mr, JonghunChoe, Secretary General, A-WEB and his colleagues in this endeavour.

Election Commissioner Shri Rajiv Kumar gave the overview of the magnitude of the ongoing Assembly elections in four States of Assam, Kerala, Tamil Nadu, West Bengal and the Union Territory of Puducherry which involved over 187.2 million voters spread over 824 Assembly constituencies. He added that the Commission has enhanced use of Information and Communication Technology to strengthen citizen participation and transparency.

Secretary General  ECI, Shri Umesh Sinha  while giving an overview of the International Virtual Election Visitor Programme 2021 stressed that Election Commission of India has been very proactive in enhancing co-operation with Election Management Bodies across the world. He mentioned that over 106 delegates from over 26 countries are participating in the IVEP 2021.

A short film on the glimpse of ongoing elections in the states of Assam, Tamil Nadu, West Bengal, Kerala and UT Puducherry and also on the A-WEB Journal was showcased to the delegates.

The Journal, published by the India A-WEB Centre (http://indiaawebcentre.org/) which was set up at ECI in 2019, highlights research papers, articles, book reviews, etc. from eminent writers, experts, researchers  and practitioners from the A-WEB Community and from across democracies of the world in the area of Elections and Electoral Democracy.  A-WEB India Journal of Elections is envisaged to be a Journal of the highest international standards and will include peer reviewed contributions from members of theA-WEB community and beyond.

IEVP 2021 would provide the participants an overview of the large canvas of Indian electoral process, the new initiatives taken by ECI on voter facilitation, transparency and accessibility of electoral system, ECI’s response to the changing needs of training and capacity building and the new formats necessitated by COVID-19 and provide insights into the elections underway in the states of Assam, Kerala, Tamil Nadu, West Bengal and the Union Territory of Puducherry.  On the 6th of April 2021 the delegates will be given a virtual tour of live snapshot of how elections are conducted at some polling stations including familiarization with the electoral process, polling station arrangements, facilitation of Persons with Disabilities and senior citizens and  interaction with various stakeholders.