Home National Country is proud of the way that our women team played in... 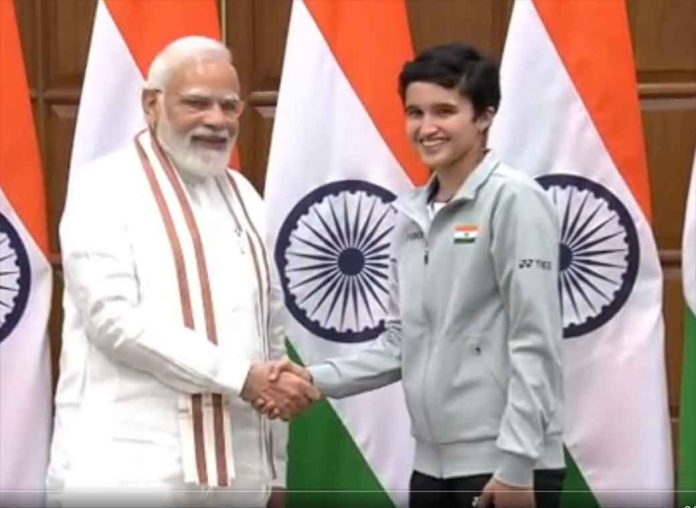 Kidambi Srikanth talked about the great feeling among the player about being recognized by the Prime Minister in such a proud way. The Prime Minister asked the team captain about his leadership style and challenges. Srikanth told that individually, everyone was performing great and the task was to bring out their best as a team. He also expressed his happiness over the privilege of playing the crucial deciding match. On being asked by the Prime Minister about his world number 1 ranking and Gold in Thomas Cup, the ace shuttler said that both the milestones were his dreams and he is delighted to have achieved them. The Prime Minister said that due to not so great performance in earlier years, Thomas cup was not very much talked about and he said it took sometime in the country to sink in the enormity of the achievement of this team. The Prime Minister said “On behalf of the entire country I congratulate you and your entire team as after decades, Indian flag has been firmly planted. This not a small feat…Keeping the nerve and team together under the tremendous pressure is something that I can understand very well. I congratulated you on phone but now I am feeling the joy of complimenting you in person”.

Satwiksairaj Rankireddy conveyed the elation and tribulation of the last ten days. He recalled the memorable support that he got from the team and support staff. He said that the team is still re-living the moments of victory. The Prime Minister shared their happiness and recalled the tweets of the team members who slept with their medal on them, totally sleepless with joy. Rankireddy also explained the review of performance with his coaches. The Prime Minister complimented his adaptability according to the situation. The Prime Minister wished him well for future goals.

Chirag Shetty also narrated his journey of the tournament and recalled coming to PM residence with Olympic Contingent. The Prime Minister said that he noted the disappointment among few players when some of them could not win a medal at the Olympics. However, he also recalled that the players were determined and now they have proved all the expectation correct. “One defeat is not the end, one needs determination and passion in life. Victory is natural outcome for such people, you have shown that”, he said. The Prime Minister told the team that they will win many more medals in the course of time. The have to play a lot and bloom (khelna bhi hai khilna bhi hai) and have to take the country into the world of sports. “Now India can’t lag behind. Your victories are inspiring the generations for sports”, The Prime Minister added.

The Prime Minister thanked Lakshya Sen for bringing ‘Bal Mithai’ as promised during the telephone call immediately after the victory. Lakshya recalled that he earlier met the Prime Minister after winning in Youth Olympics and now after Thomas Cup wins. He said that players feel deeply motivated after such meetings. “I want to keep winning medals for India and keep meeting you like this”, said the young badminton ace. The Prime Minister inquired about the bout of food poisoning that Lakshya faced during the tournament.  When asked about his advice for young children who are taking up the sport, Lakshya asked them to devote their full attention to training. The Prime Minister asked Lakshya to recall his strength and balance that he deployed when faced with the trauma of food poisoning and remember the lessons learnt for harnessing his strength and resolve.

HS Prannoy said that this is even a more proud moment as the team could win the prestigious tournament in the 75th year of India’s independence. He said that pressure was immense in the quarter final and semi-final and he was happy that that could be overcome due to the support of the team.  The Prime Minister recognized the warrior in Prannoy and said that his attitude for victory is his great strength.

Prime Minister greeted the youngest of the lot, Unnati Hooda who complimented the Prime Minister for never discriminating between medallists and non-medallists. The Prime Minister praised her determination and asked about the special quality of Haryana soil that produces so many quality athletes. Unnati replied that diet of ‘Doodh Dhai’ is the main factor to the delight of everyone present. The Prime Minister told her that he firmly believes that Unnati will shine as  her name indicates. He told her that she has a long way to go and she should never allow victories to make her feel complacent.

Treesa Jolly told about the excellent family support she received for her sporting quest. The Prime Minister said that the country is proud of the way that our women team played in the Uber Cup.

In conclusion, the Prime Minister said that this team has infused tremendous energy in the country by winning the Thomas cup. A long wait of seven decades finally came to an end. ‘Whosoever understands Badminton, must have dreamt about this, a dream that has been fulfilled by you’ “Such successes inject great energy and confidence in the entire sporting ecosystem of the country. Your victory has done something that cannot be accomplished by greatest of the coaches or the oratory of the leaders”, Shri Modi said.

Referring to Uber Cup, the Prime Minister said while we wait for victory we will also make arrangement for that. He expressed the belief that the quality athletes of the present team will soon get better results. “Our women team has shown their time and again their class. It is just a matter of time, if not this time, next time we will surely win”, he added.

In the 75th year of Independence, these victories and reaching the peak of success fills every Indian with great pride. He said ‘I can do it’ is the mood of New India. More than bothering about the competition, it is important to focus on one’s own performance, he said. He said now pressure of expectation will increase which is alright and they should not cave under the pressure of the expectations of the country. “We need to convert pressure into energy. We should treat it as encouragement”, he said

In the last 7-8 years, the Prime Minister pointed out, our players have created new records. He noted the sterling performances in Olympics, Paralympics and Deaflympics. Today, mindset is changing with regard to sports, he said. A new atmosphere is coming up. “This is like a golden chapter in India’s sporting history and champions like you and players of your generation are the authors of this. We need to keep this momentum going”, The Prime Minister assured the athletes of the country all the support.

India to host Chess Olympiad for the first time

A player sets ever higher goals and strives to attain them : PM