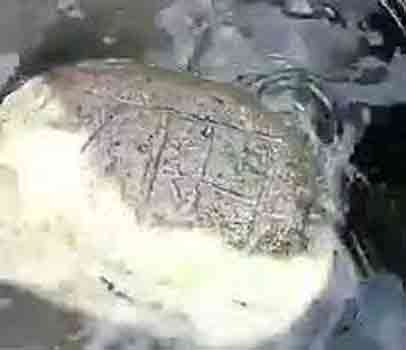 A stone with the name ‘Ram’ found floating in the river
After a stone named ‘Ram’ was found in the Ishan river of Mainpuri district of Uttar Pradesh, there was an influx of reverence. Villagers claim that this stone written Ram’s name was floating in the river, only then the shepherds caught sight of it. A shepherd entered the river and brought out the stone. The villagers are surprised to see this stone written Ram’s name.

Worshiping it with faith. Crowds of devotees have gathered to see the stone. At present, the video of this stone written in the name of Ram is becoming increasingly viral in social media. According to the details received, this incident is of Ishan river near Ahmalpur Gram Panchayat in Kusmara area. It is said that on Sunday some shepherds were grazing their cattle in the river. During this, he saw a stone floating in the river.

The shepherds took out the stone and brought it to the village and informed the village head. Nitin Pandey, the village head of Ahmalpur Gram Panchayat, took the floating stone in his hand. When he filled the tub with water and poured a stone, it kept floating.

The villagers were surprised to see this. Anyone who came to know about this came to see this stone. The word spread like fire in the forest. The villagers are seeing the stone floating in the water with faith. The head told that he would keep this wonderful stone at the Hanuman temple located at Kusmara Ramlila by making a latch and placing it in it, where the worship would be recited. PLC/ GT