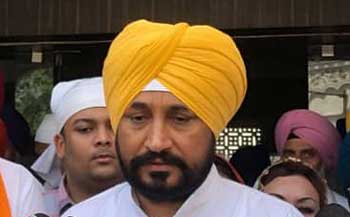 INVC NEWS
Chandigarh,
Fulfilling the promise of the Punjab Government to provide technical education in the mother tongue to the children of the state, the books of 16 different trades of technical education have been translated into Punjabi and work is underway to translate books of other 25 different trades into Punjabi.  At the same time, the Punjab Government has sent question bank of more than 25000 questions in Punjabi language to DGT, Government of India to send question papers in Punjabi to the students of the state. Earlier the question papers were sent to the technical education students by the union government only in English and Hindi, which made it very difficult for the youth of the state to understand and solve them.

The Punjab Technical Education and Industrial Training Minister Mr. Charanjit Singh Channi disclosed this here today during a press conference at Punjab Bhawan in the presence of Mr. Anurag Verma Principal Secretary, Technical Education, Mr. Kumar Saurab Dirtector Technical Education. He said that the state government has announced the development of the Punjabi language, on International Mother Language Day. He said that although it was just a beginning, the complete syllabus in reference books of most of the colleges would be prepared and made available to the students in Punjabi.

The Minister also announced to set up two state Campus Universities at Gurdaspur and Ferozpour. A MoU has been signed with IIT Ropar to improve the quality of education in Shaheed Bhagat Singh College of Engineering and Technology Ferozepur and Beant College of Engineering and Technology Gurdaspur. IIT Ropar has been made its mentor and a bill to make these two colleges campus universities would be introduced in the assembly in the next budget session.

He further said that state of art Dr BR Ambedkar Institute of Management, which will be at the national level, is being opened at Dr. IKG PTU at Kapurthala. The Mentor Institute of this institute would be IIM, Amritsar. Further the number of seats for admission in Government Industrial Training Institutes was around 23000 to 24000 for the last 10 years.

Briefing about the achievements of the Technical Education Department, Punjab the Minister said that many revolutionary steps have been taken to bring a sweeping improvement in the quality of education in the government polytechnics of the state and large-scale action has been taken against organizations found guilty of mass copying during exams. To prevent copying during examinations, cameras have been installed in the examination centres in all the institutions across the state and 40 percent cameras have been connected online with the headquarters and the process of connecting other cameras is underway. He said that cameras have been installed in 25 government polytechnics and 114 government industrial training institutes.

Talking about the unique initiative of the state Government Mr. Channi said that the CM Scholarship Scheme was introduced in the Government Polytechnic Colleges of the state during 2017-18 under the leadership of the Chief Minister Capt. Amarinder Singh. The objective of this scheme was to encourage meritorious students towards government polytechnic colleges under which students are being given scholarships according to the percentage of marks, those with higher percentages would get more scholarships. With the implementation of this scheme, about 2900 students enrolled in government polytechnic colleges have more than 60 percent marks. In the year 2016-17, there were only 1600 students with more than 60 percent marks in government polytechnics.

He further said that a Skill University is being set up at Chamkaur Sahib under the first phase of which IKG PTU Kapurthala has sanctioned Rs. 120 crore for setting up of Skill College. The tender for this work has been issued by the PWD and the construction of this college would be completed this year by working on a war footing.

Mr. Channi said that the seats have doubled in the ITIs of the state as large number of students were not able to get admissions in ITI courses. Last year alone, about 70,000 students were applied for admission in government ITIs, of which 47,000 were left disappointed. This year the number of seats has been increased to 37996 which are more than 60% in one year. Thanks to the initiative of the present Government of Punjab, many poor students will be able to get vocational skills at a government fee of Rs. 3400.

The Department has also taken a morale booster step for the good performers as letters of appreciation were given by the Principal Secretary, Technical Education and Industrial Training to 20 heads of Government Industrial Training Institutes of the state who ensured 100% enrolment by increasing the capacity of the institute by more than 50%. Similarly, the admission of the SC students has increased from 10979 in last year to 16646 students this year hence more SC students will be able to get free vocational skills.

The Minister said that the Dual System of Training (DST) was introduced in ITIs to make industrial training institutes. Under this system, the students get theoretical training in ITI for six months and learn practical training in the industry for six months. This year 413 units have been run under DST and more than 8500 students will get benefits. Under this scheme, MOU has been signed with Hero Cycle, Trident Limited, Avon Cycle, Swaraj Engine Limited, Mahindra & Mahindra, Federal Mogul Patiala, Godrej & Boyce Limited, Mohali, International Tractors Limited (SNL), Eutectic Industry Ludhiana, Punjab Alkalies & Chemical Limited, Lakme India Ltd., Hotel Hyatt, Hotel Taj etc. Two years ago, about half of the courses were affiliated with the State Council for Vocational Training (SCVT). The certificates were recognized only in the state of Punjab. Over the past 15 months, the government has affiliated with the National Council for Vocational Education and Training (NCVET). These CVET Certificates are recognized not only in the country but in 160 countries all over the world. In 2018, only 12750 students got NCVET certificates, while 33635 NCVET certificates will be received in this session (increase of more than 160%).

The state government has set up four new ITIs at Singhpura, Malaud, Adampur and Manakpur Sharif and given sanction to start 19 new ITIs at various places in the state. Out of these 19 ITIs, civil works have been started at 11 places and work at other places will be started very soon. Sports stadiums at a cost of Rs 3 crore and auditoriums at Tripuri and Adampur at a cost of about Rs. 15 crore are also being constructed.

During Covid, 20 lakh masks were prepared by the students of the department under the Mission Fateh by the department. To make masks, people donated clothes which were distributed free of cost to the poor and health workers. In addition, online education was implemented effectively during the Covid. Virtual classes were held at Zoom and lectures were given instead of just distributing training materials.