Home Other Indian State News Congress has made preparations for major changes before the Chintan Shivir in... 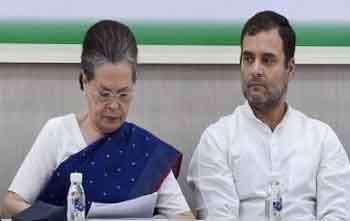 Congress has made preparations for major changes before the Chintan Shivir in Udaipur. In the Congress Working Committee meeting held on Monday, proposals like giving ticket to only one person in a family, three-year cooling-off period after holding a key post and reducing the number of panels in large numbers have been approved. Congress sources say that it was suggested to the high command that leaders including state president, district president or national executive should be kept out of office for three years after completion of one term.

It has been agreed upon. Apart from this, it has also been agreed to give ticket to only one person from one family. The party believes that with this it will be able to answer the allegations of familyism being leveled by the BJP. Congress’s Chintan Shivir is to be held in Udaipur from May 13 to 15. All these proposals will be presented in it. Before the 2024 general elections, the party wants to tighten all the screws where any laxity is visible. Under this, he has appointed new state presidents in Punjab, Haryana, Himachal Pradesh and Madhya Pradesh. Apart from this, it is also engaged in planning for states like UP and Bihar. Not only this, the party is also eyeing Rajasthan and Chhattisgarh, where elections are going to be held by the end of this year. 400 party leaders will participate in this contemplation camp.

After the Congress Working Committee meeting, a leader said, “Sonia Gandhi, Rahul Gandhi and Priyanka will announce on the proposal of one family, one ticket.” It can also be announced that in the general election of 2024, only one person from the family will contest. Apart from this, the leaders demanding changes in the Congress have been talking about the reorganization of the Parliamentary Board.

The Political Affairs Committee has suggested that the party should forge nationwide alliances. Particularly for the Lok Sabha elections, like-minded parties should be taken along. A committee on farmers under the leadership of Bhupinder Singh Hooda has also given its recommendations. The most important recommendation among these is that the party should announce that when it comes to power at the Center, then a law to guarantee the MSP of farmers will be made. Apart from this, it has also been suggested that people who buy the product in the open market at a price less than the MSP will be punished and doing so will be a crime.

In the meeting of the Congress Working Committee, some leaders also suggested that Rahul Gandhi should be toured across the country to instill enthusiasm among the workers. His suggestion was that Rahul Gandhi should travel to all the states of the country so that there could be a communication of enthusiasm among the workers and leaders of the party. However, no proposal was presented regarding the party’s president and organization elections. PLC&GT

Congress Bharat Jodo Yatra: Where the rally and meeting will be held, it is yet to be decided