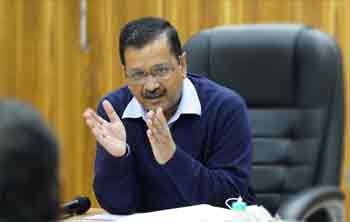 Slamming the former Chief Minister Captain Amarinder Singh for myopic mindset towards poor and common man, Punjab Chief Minister Mr Charanjit Singh Channi on Friday said that as CM Maharaja targeted him because he had raised issues of common man.

Addressing here a public gathering, the Chief Minister said that as he comes from a family with humble background so he always impressed upon the former Chief Minister to safeguard interests of common man. However, he said that instead of resolving the issues to give reprieve to poor and downtrodden, Maharaja started victimizing him. CM Channi said that but he continued his struggle for the common and underprivileged masses due to which haughty Maharaja was ousted by the Congress party.

The Chief Minister said that only Congress can take a revolutionary decision to oust a Maharaja and bestow responsibility of CM to a common man. However, he said that this revolution can sustain only if all the common and needy people stand united to support Congress. However, CM Channi categorically said that the powerful elite class is conniving to destabilize this common man’s government by dividing poor on sectarian lines.

Lashing out at Akalis, BJP and Amarinder, the Chief Minister said that they are partners in crime against the people of Punjab. He said that trio of Modi, Badal and Captain had connived to pass anti-farm laws for jeopardizing interests of state. CM Channi said that Akalis are mother of this anti-farm law as they had passed bill on contract farming in Punjab assembly in 2013, which later became the basis of the draconian farm laws adding that they were hand in glove with BJP to pass these black laws in Parliament.

The Chief Minister further said that an elite and unholy nexus of politicians across party line had eluded power from common man just to loot Punjab. He said that the members of this elite group like Badals and Captain have a common bond in form of their own vested interests and plundered the state adding that they have been willfully doing this so by enjoying the fruits of power in game of musical chairs where the ruler changes after every five years but power remains in their hands. However, CM Channi said that now this nexus has been broken and the power is with the common man.

The Chief Minister said that as he has himself faced the hardships so he is well aware of the woes of common man. CM Channi said that due to this reason only he is ensuring optimal utilisation of all government funds for well being of poor and common man. He said that this duty will continue till he is on this seat.

Slamming Aam Aadmi Party Supremo Mr Arvind Kejriwal for little knowledge about state, Chief Minister said that Delhi Chief Minister is groping in dark for fulfilling his lust of power. He said that besides being an outsider Kejriwal is a rumour monger who knows nothing about state but pokes his nose in everything. CM Channi said that such type of cheap politics will never be successful in the state.

The Chief Minister said that Kejriwal is a power greedy outsider, who desires to rule Punjab due to which he is trying to mislead Punjabis. He unequivocally said that Kejriwal and company must remember one thing that history is witness to the fact that Punjabis love their land and people adding that neither they had ever allowed nor they will permit any outsider in future to rule their state. CM Channi said that Kejriwal government has failed in Delhi whereas Congress is delivering its best to people.

The Chief Minister said that he was fortunate that Congress leadership has bestowed him this service to serve the state. He said that I am working to resolve the issues that are faced by every common man of the state. Listing the several pro-people initiatives taken by his government, he said that Power bill arrears worth Rs. 1500 crore have been waived, Power rates for domestic consumers have been reduced by Rs. 3 per unit, Bills to the tune of Rs. 1200 crore have been waived off in respect of motors in rural areas, water charges brought down to Rs. 50, Rates for sand have been reduced to Rs. 5.50 per cubic feet and Punjab Government is bearing Rs. 35 as part of cost sharing out of increased Rs. 50 of Sugarcane prices while the private mills now only have to bear Rs. 15. CM Channi said that not only this but several other path breaking decisions will be taken in coming days too.

Striking an emotional chord with residents of Border areas, the Chief Minister said that though brave hearts reside in this area but then also successive state governments have ignored them. He said that this area will be developed holistically by pumping in resources here and development will be accelerated at par with the areas that have witnessed growth under Badals and Maharaja. “It is my promise border areas will witness unprecedented development in recent times” added CM Channi.

Earlier, addressing the gathering Revenue Minister Mrs Aruna Chaudhary, while coining the slogan ‘Channi Raj, Changa Raj’ said that CM Channi has infused new spirit amongst the Congress party. She said that Punjab is witnessing a new era of unprecedented development and pro-people initiatives in regime of CM Channi. Mrs Chaudhary said that CM Channi has scripted a new saga of holistic development in border districts of state which had been hitherto ignored.

In his address MLA Mr Joginder Pal described Mr Channi as common man’s CM. He said that Chief Minister has realised the dream of every poor man adding that he has worked for well being of every strata of society. Mr Joginder Pal said that unprecedented development has taken place during the regime of Congress regime.

Youth are benefitted from this scheme

Punjabis are much more capable for leading their own state

Decision would go a long way

No one would be allowed to disturb congenial atmosphere