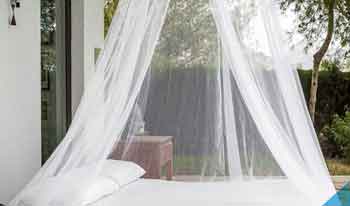 The report titled “India Untreated Mosquito Nets Market Outlook to 2024- By Unorganized and Organized, By Product Type (Frame/Foldable and Hanging), By Material Used (HDPE & Polyester, Nylon and Cotton), By Bed Size (Double Bed and Single Bed), By Regional Clusters and By Distribution Channel (Offline and Online)” gives an in depth, comprehensive study on the untreated mosquito nets market in India. The report covers various aspects including overview & genesis of the market, market trends and challenges, market size by revenue and volume, findings of a detailed customer survey conducted across tier-2 and tier-3 cities in India for understanding product adoption, perception and future demand for untreated mosquito net products in various regions, along with segmentations for regional clusters (North India, South India, West India, South India and Central India). The report also maps the competitive landscape of the market including pricing analysis by SKUs, major distributors and their strengths, weaknesses and product innovations.

Untreated mosquito nets market in India is at a late growth stage as demand has become stagnant for traditional product variants. There is a need for product innovation or disruption in the market, which could further give a push to the demand and resulting in high product awareness and acceptability. Untreated mosquito nets are currently being used as compliment product to other vector control products with higher efficacy, rather than as a substitute.

Production of untreated mosquito nets is a labor intensive and an unorganized industry. The primary production cluster is Karur, accounting for almost half of India’s production of untreated mosquito nets and having 2,000+ knitting looms. It is a highly fragmented market wherein it is impracticable to distinguish manufacturers from distributors because the value chain of the product is simplistic in nature. A manufacturer obtains mosquito net fabric from production plants/factories based in clusters such as Karur and Punjab. After procuring the raw material, his task is to merely cut out the required dimension from the roll and stitch it to form the structure of mosquito net.

By Type of Product (Framed/Foldable and Hanging)

By Size of Bed (Double Bed and Single Bed)

Northeast India is a major demand hotspot for untreated mosquito nets, whereas South India accounts for most of the production. Due to their topography and moist climate, Northeastern states such as Arunachal Pradesh, Tripura, Nagaland and Manipur are major demand hotspots for mosquito nets in India. However, region is not a major supplier of nets due to absence of local manufacturers, leading to increase in imports from China and Bangladesh.

Major production clusters in India include Karur, Surat, Ahmadabad, Delhi, Bangalore, Chennai and Mumbai. The market is highly fragmented and unorganized. However, due to presence of big manufacturers with high turnover in Tier 1 and Tier 2 cities such as Surat, Ahmadabad and Delhi, the share of unorganized sector has been decreasing marginally. Large scale manufacturers such as Riddhi Mosquito Nets and Gyasi Ram & Associates have a large export base in Africa. Small local manufacturers supply either in the same city or in states with high demand such as Orissa, Bihar, and northeastern states of India. Mosquito nets, being a very niche product was, mostly sold at local mom and pop stores in the past. Off late, a small segment of online business for sale of untreated mosquito nets has sprung up, causing a disruption in the market in Tier I cities and is expected to grow further in future with increase in product traction in the market.