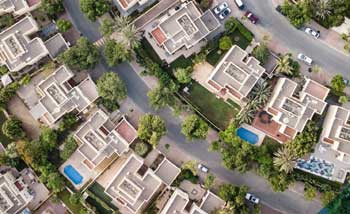 The Saudi Arabia real estate market was in crisis earlier due to the shortage in housing spaces, lack of mortgage law, decline in the oil prices and other factors. This has led to implementation of the first mortgage law in 2012, along with various government initiatives over the years. The government introduced various schemes such as Vision 2030 for increasing the foreign investment in the Saudi Real Estate Market. The main focus of government in this was to increase the presence of affordable housing for the Saudi people. In 2016, REITs were listed on the local stock exchange with the aim of increasing increase real estate contribution to GDP from 5% to 10 %. The year 2018 was witnessed to be a period of alteration in the entertainment sector of the Kingdom. It was a key part in the Vision 2030’s objective to enhance and diversify the past entertainment in the area. In line with this, the government announced various new reforms such as a new online visa scheme and other reforms to increase the tourism inflow in the region.

Retail real estate market supply of Saudi Arabia has witnessed a positive CAGR during 2013-2018 and is projected to remain positive in future. The retail sector in Saudi Arabia has been hardest hit on the demand side by the expatriate exodus. The price-cutting has eased down a bit; however consumers are still price-sensitive. The market has witnessed developments that have transformed the retail market from small and unorganized markets to structured and extravagant shopping malls, with international brands, entertainment areas, hypermarkets and supermarkets. Majority of the retail outlets are spread across regional and super-regional malls and structured shopping centers that have replaced the traditional strip malls and shopping center retail concept.

The hotel market in Saudi Arabia is undergoing transition due to stern measures by government as there was dip in crude oil prices. However, government wants to reduce dependency on oil therefore it is making key investments in developing region as an entertainment destination which will have a positive impact on the hotel market. The Vision 2030 focuses on increasing GDP contribution from tourism and for this the government initiated major projects such as Qiddiya Project, Red Sea Project, Neom, Amaala Project and others. The total number of tourist’s arrivals in Saudi Arabia in 2017 was 18.6 million which increased to 23.6 million in 2018, thus registering a growth of 26.9%. The government wants to increase the domestic and international visitors and at the same time wants to decrease the outbound tourism of the country. The ADR has been declining in the market as the general economy has remained subdued which has led to increase in the vacancy rate in the hotels.

The aim of government is to diversify the economy. In 2016, government announced a SAR 200 billion private sector incentive package to boost the private sector’s growth and increase the rate of employment in the country. The office market in Saudi Arabia is witnessing subdue pressure as the rentals have been declining. The rentals and occupancy level has been under pressure since 2016 and this trend is expected to continue as there is oversupply of low quality office spacing. The office space supply had a positive CAGR during the review period. The future supply is focused on developing theme-based office parks, mixed-development projects and others. The co-working space is entering in the Saudi Arabian market and it is expected it will open new avenues in future.

The demand for affordable housing units is increasing in Saudi Arabia Residential Real Estate market. The government is focusing on Saudization which has resulted in expatriates leaving the country. This has further declined the demand in the residential real estate market. In the beginning of this decade there was shortage of housing spaces, lack of mortgage law and other problems which were in the market. The government has been actively working on the issue of housing and has made various structural changes for dealing with this issue. It has also undertaken several initiatives for increasing the home ownership numbers in Saudi Arabia. The market witnessed growth in the supply of housing units at a positive CAGR.

The government’s vision of reducing the reliance on oil economy and diversifying into other sectors especially on real estate has resulted in growth of the real estate industry in Saudi Arabia. The market has high competition where the demand for new properties is increasing due to growth in the commercial activities and increase in competition. Some of the major real estate development companies operating in the Saudi Arabia are Al Saedan Real Estate, Kingdom Holding Company, Ewaan, Al Ra’idah Investment Company, SEDCO Development, Jabal Omar Development Company, Makkah Construction & Development Co, Emaar, Dar Alarkan Real Estate Development Co and Saudi Taiba Investment and Real Estate Development Co. Competition among developers majorly happens on the parameters such as land bank, location of the property, upcoming projects, construction costs, reputation of the company and other parameters.