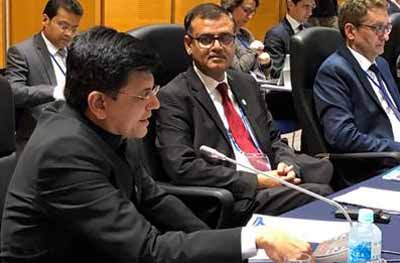 Interacting with participants, Shri Piyush Goyalsought the cooperation and suggestion of all stakeholders in expanding both domestic and global market for tribal products and assured his support towards tribal product commerce. He said that the Government is committed to promote Make in India products and Tribes India, Handlooms and Khadi products all should be promoted through various means.

Addressing on the occasion, Shri Arjun Munda said that TRIFED has grown into a very large family of economically active tribals including tribal master craftsmen & craftswomen and tribal forest dwellers pursuing micro entrepreneurship. It is now of paramount importance to expand the market both domestic and international.

Several participants including representatives of FICCI, CII, ASSOCHAM, DICCI and top Advertising consultants, top Fashion designers and senior government functionaries shared their views as to how the market for tribal products be expanded at domestic as well as at international level.

Shri Pravir Krishna said that the workshop has been organized to converge the efforts of various stakeholders, leading national Institutions, Social sector and most of all Industry leaders, and work towards this singular goal of promoting tribal produces in a big way. He dwelt upon many new initiatives of TRIFED and Ministry of Tribal Affairs for popularising tribal products.

TRIFED has charted out a comprehensive plan of action for realizing its goals. Representatives from FICCI, ASSOCHAM, DICCI, CII, expressed their support for TRIFED and said that their collaborative efforts will further steer the popularity of TribesIndia products by Corporate Gifting, getting promotional space for tribal murals/displays in their corporate offices, rack-space in their retail outlets, franchise partnerships, etc.

Focusing on improving the design and marketability of tribal products, TRIFED is associating with premium Institutes of design like NID, NIFT, as well as iconic global fashion designers representing the best of Indian & International fashion. Officials from the design institutes participating in the workshop said, “We strongly support the cause of tribal livelihood generation and by partnering with TRIFED, we will help in product enhancement and make Tribes India a household name.”

TRIFED also aims to establish Tribes India kiosks in international airports, partner with PSUs, and government departments for gifting to boost the popularity of tribal handicrafts & handlooms across the nation and beyond. Industry Associations, various Corporates and PSUs expressed their support for TRIFED’s objectives and shared their plans for the future.

TRIFED’s efforts towards tribal livelihood generation have received plaudits from various ministries of the Government of India, including special mentions by the Minister of Finance, Minister of Commerce& Industry, and the Minister of Home Affairs. The Indian delegation to the World Economic Forum including the Minister of Commerce, MoS Shipping, among other officials also gifted products from Tribes India to foreign dignitaries attending the globally renowned conference which is being held in Davos, Switzerland from 20-25 January 2020.

TRIFED over the last three years has revamped itself as a network of 120 outlets across the country of which 72 are owned and operated by TRIFED themselves. Tribes India outlets are already operational at the airports of Chennai, Jaipur, Ahmadabad, Udaipur, Coimbatore, Trivandrum, Pune, Goa, Kolkata. TRIFED also has aggressively pursued their e-Commerce strategy with their own website(www.tribesindia.com)and is also on other major e-commerce portals such as Flipkart, Snapdeal,Paytm, Amazon India, Amazon Global etc. To push Government institutional purchases, TribesIndia has a presence in Government e-Market Place (GeM). National Level Tribal Festivals namely Aadi Mahotsavs, along with other exhibitions, are being organised in various cities all over the country are other efforts being takento expand the footprint of TribesIndia products and country’s tribal heritage.

You have the opportunity to effect change in the world and...