INVC NEWS New Delhi, As part of “Commemoration of Tatya Tope’s 200th Birth Anniversary”, the Ministry of Culture with the support of Nehru Memorial Museum and Library organized a Special Lecture and a National Conference here today. Prof. Makkhan Lal, of Delhi Institute of Heritage Research and Management, New Delhi gave the Special Lecture on the topic of ‘First War of Independence and the Indian Nation’. Delivering his lecture, Prof. Makkhan Lal pointed out that how the idea of ‘Indian Nation’ came into the parlance of Indian history writing. The lecture attempted to address this issue through the debate whether India is really a conglomeration of nations and what does the history of Indian civilization itself say on this.  He noted that in the 18th and 19th centuries the British scholars and administrators focused on India’s vast geographical dimensions, it’s cultural diversity, and religious plurality. The British could not believe that all three could co-exist within one nation and they spread the myth that India was never a nation and that they are the one who united it politically and made it into a nation. Prof. Lal quoted Mahatma Gandhi from Hind Swaraj that Gandhi exposed the fallacy of British view of Indian nation. He also quoted various scholars and ancient Indian texts to define the geography and culture of India. The first definite mention of Bharata as a country (Desha) and as a nation (Rashtra) is found in the 7th century, in Panini’s accounts; the Buddhist literature speaks of seven regions of Bharata while the Puranas clearly define the term Bharatavarsha. Kautilya visualized one huge political entity of India. In modern times nationalist leaders such as Bipin Chandra Pal, Jawaharlal Nehru and Sardar Patel, and several others visualized the concept of Indian nationhood within its great diversity. He concluded that freedom fighters such as Tatya Tope, Nana Saheb Peshwa and others had only one ideology – Indian nationhood and only one nation that was Bhartavarsha. In the conference on “Tatya Tope and the First war of Independence” speakers focused on the multifaceted personality of Tatya Tope, various aspects of the 1857 protests, and its dimensions and consequences. Prof. Suresh Mishra in his paper examined the two important documents written in Bundeli language published by the Madhya Pradesh State Archive and Museum. He also provided references on correspondence between Tatya Tope and various regional rulers of central India. Dr. Rajesh Tope, one of the fourth generation descendents of Tatya Tope, explored Tatya Tope’s Operation Red Lotus in 1857 as a Maratha-Mughal alliance against the British and highlighted that 1857 was a Battle that was lost, but the War was won. Ms. Ananya Parida’s paper focused on two convicts of 1857, viz., Moulvie Ahmed Oollah, a Wahabi convict of 1857 captured almost a decade after the Rebellion and Moulvie Ala–ud-Din, a Mutineer prisoner of 1857 who led an attack on the Residency at Hyderabad. Another speaker Shri Ajay Mahurkar examined how a returnee emigrant became active in the first decade of the nationalist movement in India based on the study of Lala Brindaban. 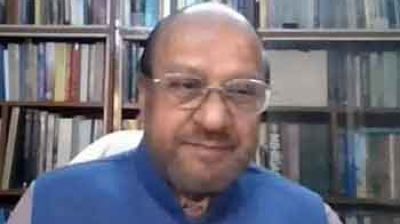 The net zero targets are expected to be met through...