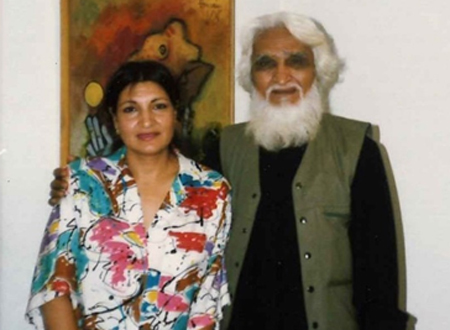 For decades, the sprawling home of Mahinder and Sharad Tak in Bethesda, close to Washington DC, has been a magnetic gathering place for some of the country’s most well-known social, cultural and political figures. Hosting art exhibitions, musical performances, mushairas or traditional poetry recitals, school tours and even significant cultural and political fundraisers, the couple has been instrumental in building strong bridges between South Asia and North America for almost half a century now.

Born in Kashmir, Mahinder grew up in the foothills of the Himalayas surrounded not only by verdant nature, but by rich traditions of art, poetry, music and theater. An early memory that has stayed with her is of trips with her siblings and grandfather, a scholar of Urdu and Persian poetry, to the museum on the banks of the Jhelum River in Srinagar to view its collection of miniature paintings. She chose medicine as a profession, but her awareness and appreciation for the arts remained an integral part of her life.

On annual trips back to India, Mahinder would visit art galleries, inevitably purchasing one or two pieces for her home. However, it was only a few years later in the early 1980s, when she was introduced to the artist Maqbool Fida Husain on one of his trips to the United States, that this interest grew into a passion and she began to seriously collect Indian art. Mahinder met Husain often, he introduced her to several artists and gallerists in India and to the only major collectors of South Asian art in America at the time, Chester and Davida Herwitz.

Over the decades that followed, Mahinder would visit artist studios and exhibitions on her trips to Delhi, expanding the group of artists she knew and forming lifelong friendships. An early supporter of several artists, she acquired major works from Husain, Manjit Bawa, Jagdish Swaminathan, Sayed Haider Raza, Gulam Rasool Santosh and others, who often reserved the best works from their shows to show her. It was from the Herwitzes, however, that Mahinder understood how art and her growing collection could become a language of cross-cultural understanding.

As the walls of the Tak home started filling with an incredible array of South Asian art, several of the family’s artist, poet and musician friends would stop by. Many would stay with the Tak family, exhibiting their work or performing in their home. The Taks hosted exhibitions and events for Husain, Manjit Bawa, Krishen Khanna, Arpita and Paramjit Singh, Arpana Caur and Natvar Bhavsar to name just a few, helping them grow their collector bases significantly. In 2006, the couple was listed among the top 100 collectors in the country by Arts & Antiques magazine.

Mahinder noted, “I have had immense pleasure knowing the greatest Indian and East Asian artists, including musicians and writers, and have made a number of fulfilling friendships through this shared love of art. Art for me is very humane; like my other profession – medicine – it touches people and bridges many gaps […] But most of all, collecting art has allowed me to keep my Indian identity in my home in America. My goal is to pass this rich heritage to our future generation of Indian Americans in the United States” (M. Tak, India: Contemporary Art from Northeastern Private Collections, Rutgers, 2002, p. 24).

Today, Mahinder and Sharad are recognized not only as pioneering art collectors, but are counted among the most prominent Indian-American philanthropists. They gifted and loaned works from their collection to the Smithsonian National Museum of Asian Art and helped major American institutions acquire new works. Recently works from the Tak collection have been featured in Gateway Bombay at the Peabody Essex Museum in Salem, After Midnight, Indian Modernism To Contemporary India 1947/1997 at the Queens Museum, and Arpita Singh: Six Decades of Painting at the Kiran Nadar Museum of Art (KNMA) in New Delhi.

Mahinder has served on the board of trustees of the National Museum of Women in the Arts in Washington DC for several years now, and the Taks have also contributed to several major exhibitions and events at the Smithsonian Institutions, the Kennedy Center and the National Museum of Asian Art, where Mahinder also served as a board member in the past. The couple continues to significantly provide for the visibility of women artists and artists of color in the country by lending support to exhibitions and museum accessions that spotlight them. Susan Fisher Sterling, Director of the National Museum of Women in the Arts notes, “Dr. Tak has been a member of the Board of Trustees and Works of Art Committee of the National Museum of Women in the Arts for well over a decade now.  She was a groundbreaking collector, engaged with key painters who were critical to the development of contemporary Indian art.  Women like Arpita Singh, Shobha Broota, and Arpana Caur.  Mahinder recognized their genius early on, and she brought her knowledge of Indian art and her larger understanding of the global art scene to us.  Her ability to operate in both spheres and impart her insights has been very important to NMWA’s growth as an inclusive arts institution” (Correspondence, January 2022).

Currently, the Tak collection, which continues to grow, includes works by major modern and contemporary South Asian artists from across the twentieth and twenty-first centuries, including Husain, who painted a portrait of Mahinder, F.N. Souza, S.H. Raza, V.S. Gaitonde, Krishen Khanna, Manjit Bawa, Jagdish Swaminathan, Rameshwar Broota, Bhupen Khakhar, Arpita Singh. Additionally, Mahinder now collects works by American artists she admires like Sam Gilliam, and supports and exhibits the work of emerging American artists. The scope and depth of the Tak Collection speaks to the friendships Mahinder and Sharad have built with almost all of these artists, and their longstanding investment in their South Asian heritage.

Luminaries of the National Capital Region’s cultural landscape, the Taks actively fostered the South Asian art and music scene there, supporting artists who would go on to gain global renown and bring fresh attention to the contemporary culture of South Asia. We are honored to present a significant selection of works from the Collection of Mahinder and Sharad Tak in this catalogue, and to highlight the many ways in which this visionary couple has supported, mentored and inspired generations of artists and collectors in our field.