Total Read - 42        Comments - 0
INVC,, New Delhi,,,, Shri Narender Bragta, Horticulture Minister urged the Union Government to provide liberal financial assistance for upgradation of Gumma-Baghi-Sidhpur-Narkanda road in Shimla District of the State. Shri Narender Bragta called on Shri Kamal Nath, Union Minister for Road Transport and Highways at New Delhi and pleaded for Rs. 20 crore budget allocation under central road funds for this road for 2010-2011. He said that State Govt. had already declared this road as major District roads during current financial year and added that the construction of the road would benefit the apple belt of upper Shimla District which was the backbone of the entire economy of the region. He said that State Govt. had already submitted Detailed Project Report of this road to Union Govt. which was pending for sanction with the concerned authority. He said that 190 km.Poanta- Rajban-Shilai-Minus-Hatkoti road had been declared as National Highway in December, 2008 and its annual plan of operation for the year 2010-2011 has already been submitted to National Highway authorities. Union Minister for Road Transport and Highways agreed in principle to give priority for construction of the road being life-line of the apple belt of the State which would boost the economy and help in smooth transportation of apple crop . [caption id="attachment_12180" align="alignnone" width="800" caption="Sh.Narender Bragta,Horticulture Minister called on Sh. Kamal Nath Union Minister for Road Transport &Highways in New Delhi"] 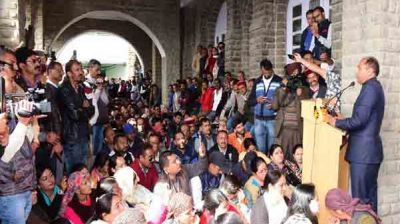 Every individual needed to be delivered justice and equal opportunity...

MIS being implemented with a view to ensure minimum price...

Developed countries like China had dumped the apples in domestic...