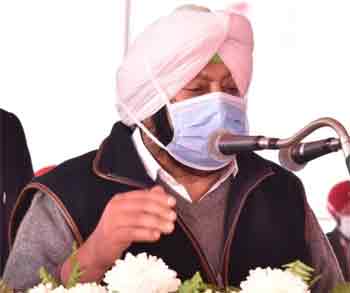 INVC NEWS
Chandigarh,
Vindicating the Punjab government’s stance on the investigations into the 2015 sacrilege incidents, the Punjab and Haryana High Court has directed the Central Bureau of Investigation (CBI) to hand over all case diaries and papers related to the cases to the Punjab Police within a month.

Terming the High Court directions as an endorsement of the state government’s stand on the issue, Chief Minister Captain Amarinder Singh said it was high time the CBI listened to the courts and handed the case files back to the state so that the perpetrators of the crimes could be brought to justice. His government had been fighting the CBI high-handedness for than 2 years, but the agency had failed to heed the various directions and orders of the courts in this time, he pointed out. Asserting his commitment to bring the cases to their logical conclusion, the Chief Minister said the central agency should respect the verdict of the judiciary and stop overreaching the courts at the behest of its political masters.

The High Court’s directions came during a hearing on the plea of one of the accused in the 2015 Faridkot sacrilege incidents, Sukhjinder Singh @ Sunny, challenging the investigation being undertaken by a SIT of the Punjab Police on the ground that the CBI is already seized of the investigation.

The High Court rejected Sukhjinder’s plea and asked the CBI to hand over all relevant documents and material in the sacrilege cases to the Punjab Police. It further directed the Punjab Police to consider the material handed over by the CBI and file a supplementary challan in the case, for consideration by the trial court. The trial court may then notice to the accused, if thought fit, the judges further said.

It is noteworthy that the CBI has been scuttling the SIT probe since the state government withdrew its consent for the probe by the central agency in 2018. The CBI has been persistently refusing to hand the case files back to state, and in September 2019, went so far as to constitute a new investigative team in a clear bid to obstruct the SIT investigation, after having earlier filed a closure report.

The SIT, it may be recalled, had been constituted by the Captain Amarinder Singh led state government in September 2018, after the Vidhan Sabha passed a resolution withdrawing consent to CBI to investigate the cases, noting lack of progress in the investigation. This decision was challenged before the Punjab and Haryana High Court and was upheld by a judgment passed on 25th January 2019. Despite this, the CBI did not hand over the case diaries and papers relating to the sacrilege cases to the Punjab Police. Instead, the CBI proceeded to file a closure report before the CBI Court in July 2019. Thereafter, the CBI requested the CBI Court to keep the closure report in abeyance and sought permission to investigate the case further.

CBI’s appeal challenging the 2019 judgment of the Punjab and Haryana High Court was dismissed by the Supreme Court in February 2020. Even after dismissal of the appeal, CBI did not hand over the case papers to the Punjab Police. A Special Investigation Team was constituted by the Punjab Police to independently investigate into the sacrilege matters. The SIT filed a chargesheet before the trial court in Faridkot in July 2020, which was challenged by Sukhjinder Singh.

The incidents of sacrilege occurred between June to October 2015 following theft of the sacred Guru Granth Sahib from a Gurudwara in Burj Jawaharsinghwala, Faridkot and discovery of torn pages from the Holy Book in Bargari, Faridkot. They caused widespread discontent and outrage amongst members of the Sikh community.

These incidents led to large-scale protests and agitations in October 2015. The retaliatory action taken by the police led to injuries and death of two persons. In 2015, the Akali Dal Government had transferred investigation of the sacrilege incident to the CBI. Retd. Justice Zora Singh Commission was appointed to inquire into the incidents of sacrilege and police action in the protests, and a report was submitted to the Government in 2016.