The Central Bureau of Investigation has arrested Project Manager of Jharia Project Office, Mineral Exploration Corporation Limited (MECL) Dhanbad (Jharkhand) while demanding & accepting a bribe of Rs. 13,000/- from the Complainant.

A case was registered on 29.09.2016 on a complaint. The Complainant (a private contractor) alleged that accused had demanded a bribe of Rs. 13,000/-, from him for making payments to him in respect of supply of Water Tankers for MECL, Jharia Project.

CBI laid a trap and caught the accused red-handed while demanding & accepting a bribe of Rs. 13,000/- from the Complainant. Searches were conducted at the official & residential premises of accused at Jharia, Dhanbad and Dehradun (Uttrakhand).

The arrested accused was produced before the Designated Court at Dhanbad and remanded to Judicial Custody. 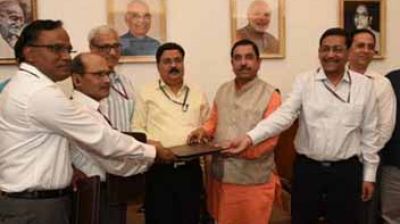 KABIL Set up to Ensure Supply of Critical Minerals

2500 toilet blocks identified and process started for completion of...

The detailed exploration carried out by MECL has led to...

Afghanistan Minister Invites Indian Companies To Invest In The Mining...