Our focus was on promoting voluntary tax compliance, facilitate the compliant tax payer and go after 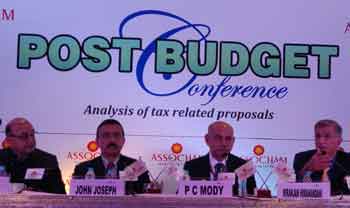 the delinquent ones, said Shri PC Mody, Chairman, Central Board of Direct Taxes (CBDT) while talking about the thought process that went in drafting Budget 2020 at the ASSOCHAM’s Post Budget Conference to analyse tax related proposals.

“The government focused on successful implementation of Faceless Assessment scheme in a phased manner as part of its endeavor to build trust between the tax administrations and tax payer. This scheme is aided by technical units with an intention to minimize and reduce any sort of personal interface between tax payer and the tax officer so that there is no question of any sort of harassment in any form.” he said.

Talking about the innovative ‘Vivad se Vishwas'' scheme announced in the Union Budget he stated, “I feel this is a fair deal and I would urge people to rethink about the pending issues, and come forward and avail of the scheme.”

Delivering the Welcome Address, Dr. Niranjan Hiranandani, President, ASSOCHAM said, “Budget 2020 is going to set the tone for the next 5 years. The direction in terms of what the finance minister stated in concurrence with the direction set by Prime Minister Modi has set a vision document which is absolutely clear - integration in terms of the entire world, focus on agriculture, investments in different ways that is cleared and corporate tax 25%.”

Delivering the Special Address and talking about the need to extend support to faltering sectors at the right time and right extent, Dr. John Joseph, Member – Tax Policy, Central Board of Indirect Taxes and Customs (CBIC) said, “Government has increased customs duty substantially on lot of items that are manufactured by SMEs to support the sector so that more people get employed and economic activity starts.”

ASSOCHAM Post Budget Conference to bring greater awareness about the new tax proposals and policy initiatives in the Union Budget 2020-21 and to provide clarifications across the table to all stakeholders.

Thyroid a lifelong disease, proper medication can help keep a...

Government has fixed a target of 10% blending of fuel...