INVC NEWS New Delhi,
In over a decade since its inception,  a grouping of emerging economies of Brazil, Russia, India, China and South Africa, has today emerged as a powerful global economic bloc. BRICS has evolved as a serious, competent and responsible grouping addressing issues and challenges with global and regional ramifications. Starting essentially with economic issues of mutual interest, the agenda of BRICS meetings has considerably widened over the years to encompass topical global issues. BRICS cooperation has two pillars – consultation on issues of mutual interest through meetings of Leaders as well as of Ministers of Finance, Trade, Health, S&T, Education, Agriculture, Communication, Labour, etc. and practical cooperation in a number of areas through meetings of Working Groups/Senior Officials. The engagement of BRICS countries with the rest of the world in terms of trade flows has increased over time. Merchandise imports from the world into the BRICS countries have gone up from US$ 2.95 trillion in 2012 to US$ 3.03 trillion in 2014. Likewise, the global merchandise exports of the BRICS countries have gone up from US$ 3.2 trillion in 2012 to US$ 3.47 trillion in 2014. Intra-BRICS trade has also been on the rise. In 2012, intra-BRICS trade stood at US$ 281.4 billion and this increased to US$ 297 billion in 2014. This encouraging trend needs to be strengthened as trade amongst BRICS nations is less than 5 per cent of their total global trade. There are several shared interests that bring the BRICS economies together. A major agenda of the grouping is to reform the global governance architecture which is yet to reflect the changing global scenario where the emerging economies are playing a larger role. Another agenda for the BRICS economies is to work with the international community in keeping the multilateral trading system stable. The most important development under BRICS has been the creation of the New Development Bank (NDB) which aims to serve as a source of finance for developing and emerging economies to meet their developmental needs. Even as BRICS nations work together towards achieving these objectives, there is a need felt for measures to be taken to deepen intra-BRICS economic engagement, trade and investment ties. The programmes planned at New Delhi – BRICS Trade Fair (October 12-14, 2016), BRICS Business Forum (October 13, 2016) and BRICS Business Council (October 14, 2016) – are steps that would help the grouping to collectively move in this direction. The first BRICS Trade Fair and Exhibition will be staged just ahead of the BRICS political summit in Goa (October 15-16, 2016). This major initiative was proposed by the Prime Minister of India, Shri Narendra Modi, last year during his address to the members of the BRICS Business Council at Ufa, Russia. In line with the overall core theme for BRICS in 2016, the focus of the Trade Fair is ‘Building BRICS – Innovation for Collaboration’. The Trade Fair is expected to give an impetus to intra-BRICS economic engagement and to foster connects amongst members of our business community. The Fair will showcase about 20 key sectors. These include aerospace, agro-processing, auto and auto components, chemicals, green energy and renewables, healthcare and pharmaceuticals, railways, textiles and apparel, infrastructure, IT, engineering goods, tourism, gems and jewellery and skill development. The BRICS Trade Fair will be a platform for respective BRICS countries to exhibit the state-of-the-art technologies and advances made in industrial development. Besides established companies, start-ups and innovators from BRICS will showcase their offerings. The idea is to help technology solution providers from BRICS countries to share knowledge and expertise in dealing with the common development challenges in areas such as healthcare, education, energy efficiency, waste management and urbanization management. Besides, business leaders from BIMSTEC countries (Bangladesh, Bhutan, Myanmar, Nepal, Sri Lanka and Thailand) have been invited for meetings and discussions with the BRICS business leaders and companies at the Trade Fair. This is a new dimension and complements the regional outreach efforts being made by our respective governments to fortify South-South cooperation. In addition to the BRICS Trade Fair, BRICS Business Forum will be held on October 13, 2016. This is a full day conference that will see participation from over 1000 business delegates from all BRICS countries. Hon’ble Vice President of India and the Trade Ministers of all BRICS nations have been invited to address the participants and share their vision for economic engagement at the BRICS Business Forum. The Vice President of New Development Bank and the senior team will join this forum and share how the private sector can support its own efforts to promote sustainable development projects across BRICS countries. The Forum is expected to give a fillip to these efforts. The BRICS Business Council was established during the fifth BRICS Summit in Durban, South Africa, with the objective of promoting and strengthening business, trade and investment ties amongst the business communities of the five countries. The Council will hold focused seminars and workshops concurrent with the Trade Fair. The seven working groups in the areas of Infrastructure, Manufacturing, Financial Services, Energy & Green Economy, Skills Development, Agribusiness and Deregulation that have been formed under the aegis of the BRICS Business Council will engage in interactions with a view to better understand the market opportunities and build synergies based on their respective competitive strengths and to promote industrial development and job creation. Through the various programs that will be held, it is expected that many suggestions would emerge to take forward and implement the action plan contained in the BRICS Strategy for Economic Partnership.
Read the full article
Tags: BRICS BRICS Trade Fair Business Forum & Business Council to be held in New Delhi on October 12-14 Business Forum & Business Council 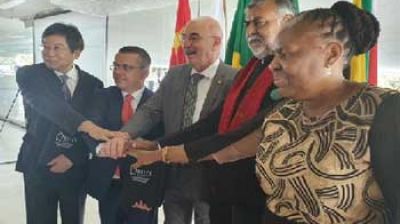 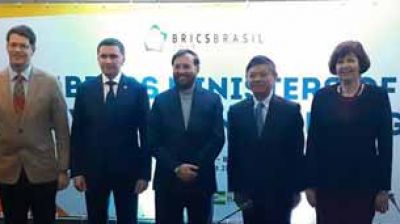 BRICS countries urged developed countries to fulfill their commitment under...

Hopeful of productive meetings and interactions at the BRICS and...

STI have emerged as the major drivers of national development...

Radha Mohan Singh shall participate in the IVth Meeting of...