Home Latest news BJP is working on the formula of harnessing youth power and experience... 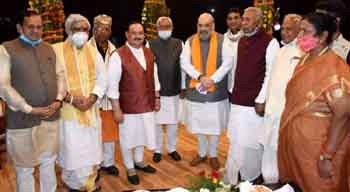 Many old BJP leaders will be sidelined

The BJP think-tank does not want any generation gap in the organization, so that the party is recognized as a party with less presence of old or youth in a few years. Earlier, the BJP had refrained from fielding leaders of 75 years of age and above in the Lok Sabha and assembly elections. In the assembly elections held in the year 2018, the party had cut the tickets of many leaders including Babulal Gaur, Sartaj Singh, Ramkrishna Kusmaria, Maya Singh, Kusum Mahdele. Many of them were also ministers. Assembly elections are to be held in the state at the end of next year. It is estimated that there are more than 50 seats in the state, where the number of youth is decisive in terms of age group. Here, the way important responsibilities are being given to the youth in the organization, there are clear indications that the party is working on the formula of using youth power and experience separately. Party sources say that giving priority to youth for their duties from booth level to state level in the organization will increase the participation of young and energetic people. Election strategy and social equations are also being taken care of at the mandal and district level. With the opportunity to the youth, the party will definitely get the support of those sections, whose participation has been relatively less. BJP State Minister Rajnish Agarwal says that generation change in BJP is not a special campaign but a natural process. The party considers keeping in mind the sentiments of the workers and the expectation of the people as well as the chances of winning. This party does not work for an election but continuously for an ideological purpose, so decisions are taken from that point of view. PLC