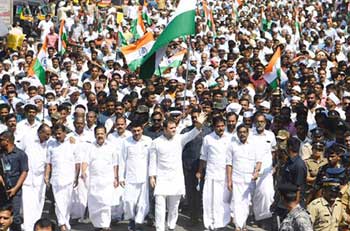 Bharat Jodo Yatra will be delayed by 8 to 10 days

Congress MP Rahul Gandhi is on Bharat Jodo Yatra these days. His Bharat Jodi Yatra in MP will now take 8 to 10 days late entry in the state. According to the schedule, his journey was to enter MP on 24 November and was to leave the state from Ujjain to Kota on 10 December. Now the reason for the delay is coming to the fore that Rahul’s speed is according to the schedule, but the speed of the team running with him is slow.

For this reason, party sources now say that one day’s rest in a week is also being added to the yatra. Due to this, two to three days in each state will be more than the fixed schedule. Rahul Gandhi’s journey in the state is to be 382 km in 16 days. The entry of this yatra, which started on 7th September, was earlier to be done on 24th November but now it will be around 1st December.

There is a committee of 9 people in the Yatra. According to former minister and MLA Jitu Patwari, who is looking after the preparations for the journey in the state, the possible journey will go to Kota via Akola, Burhanpur, Indore, Ujjain, Agar. The journey in the possible route will come in a big way. Partial change is possible. Route tracking is still going on. According to party sources, Narmada, Shipra and Mahakal Darshan are also involved in the yatra. PLC/GT