AYUSH doctors will examine all those who turn up and also distribute free medicines : Dr Harsh Vardhan

INVC, Delhi, The Sixth World Ayurveda Conference (Akhil Bharat Ayurveda Mahasammelan), to be held at PragatiMaidan, New Delhi, between November 6 and 9 under the government’s aegis, will be the first of a series of events proposedto celebrate the place of the “fifth Veda” in the mainstream of the Indian public health system. Announcing this at a press conference today, Dr Harsh Vardhan, Union Health Minister, said the brand new All India Institute of Ayurveda (AIIA) coming up at Jasola, Delhi, will admit the first batch of post-graduate students during the academic year 2015-16. Dr Harsh Vardhan said, “One of my first decisions was to approve the course content. I would like to see this develop into an institution comparable to the All India Institute of Medical Sciences—an AIIMS for Ayurveda.” The 200-bed, seven-storey referral hospital, also coming up within the 10-acre campus, will begin to admit patients within six months from now. AIIA will emerge as a Centre of Excellence dealing with fundamental research, drug safety evaluation, standardisation, quality control and scientific validation of Ayurveda medicines. Elaborating on the format of the World Ayurveda Congress, Dr Harsh Vardhan said it will comprise 5 plenary sessions and 25 technical sessions on 15 research themes. In all, 750 scientific papers will be presented by scientists from India, Germany, Italy, USA, Argentina, Russia and many other countries. The international delegate assembly, International Seminar on Medicinal Plants organised by the National Medicinal Plant Board and a Buyer –Seller meet organised by Pharmexcil will be the added attraction of the Congress. The Minister announced plans to make it a public event through the “Arogya Expo” which is envisaged as a “health mela” on Ayurveda, Yoga, Naturopathy, Unani, Siddha andHomoeopathy systems of medicine. This will be held at Hall No. 18 as a sideline event to the World Ayurveda Congress. About 500 pharma companies dealing in Ayurvedic medicines will be participating. “The public will be invited to see for themselves the wonders of our traditional medicines. We will open free consultation facilities where AYUSH doctors will examine all those who turn up and also distribute free medicines. Live Yoga sessions are also planned,” Dr Harsh Vardhan said. The Minister, despite being an ENT surgeon from the field of modern western medicine, was forthright in his admiration of Ayurveda. He said that he has already given AYUSH pride of place in the AIIMS structure by opening up AYUSH departments in the new, upcoming AIIMS. A special expert group has also been constituted to develop holistic medicine. Dr Harsh Vardhan observed, “Ayurveda may be ignored today in India, but all Indians will be proud to know that the Museum of Pathology in Chicago Medical School in Illinois, US, has a portrait of the ancient Indian medical practitioner, Susruta. Under the portrait is a caption which reads,‘The man who did the first cataract surgery’.” He added, “Over the next couple of years I wish to make the World Ayurveda Congress as popular as the India International Trade Fair which is also held at PragatiMaidan Through this, the new generation of Indians will learn more of India’s proud history as the birthplace of modern medicine. The health camps will surely be a big draw,” 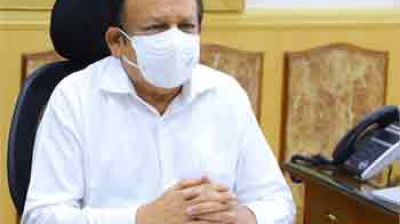