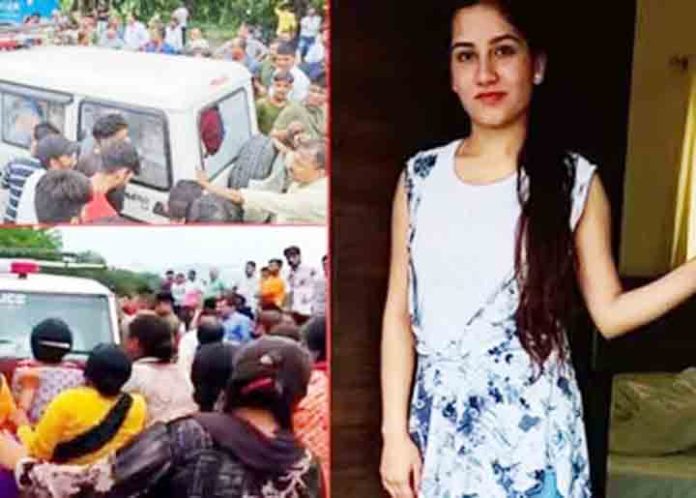 Ankit Bhandari case of Uttarakhand – post mortem report made public
After the body of Uttarakhand’s daughter Ankita Bhandari was recovered from the Chila Shakti canal on September 24, she was sent to AIIMS Rishikesh for post-mortem. According to the PM report draft, Ankita died due to blunt force trauma (severe head injury) and drowning.

She was the daughter of a former security guard and an Anganwadi worker. She had passed 12th and was keen to go to college. But when her father quit her job as a guard, she decided to work as a receptionist at a resort late last month. Ankita could not even take her first salary. On September 18, the operator of the resort and two managers pushed him into the canal and killed him.

On Saturday, six days after she went missing from a resort in Uttarakhand’s Laxman Jhula area, police recovered Ankita’s body from a canal. On September 23, the police arrested Pulkit Arya, the owner of the resort, son of former state minister Vinod Arya. Resort manager Saurabh Bhaskar and another person named Ankit have also been arrested.

According to the police, all three have confessed to pushing Ankita into the canal after an alleged altercation during interrogation. According to a report in The Indian Express, Uttarakhand DGP Ashok Kumar said the police have now found evidence that the accused are allegedly pressuring Ankita to provide “special services” to some guests at the resort. and when he resisted, he was killed.

Ankita Bhandari’s elder mother said – Killed her before paying her first salary, according to Ankita’s family members, on August 28, she had arrived at Vantara Resort in Rishikesh, about 130 km from her village Dobha Srikot, to work as a receptionist. Ankita’s elder mother Leelavati told The Indian Express, due to her family’s financial condition, she had to drop her education and start working after completing her intermediate from Bhagat Ram School in Pauri.

Ankita’s father Virendra Bhandari used to work as a private security guard at Chauras Dam, but left the job a few years ago. The only earning member in the family is his mother Soni Bhandari, who works as an Anganwadi worker. His elder brother Sachin is studying in Delhi.’ Leelavati said, ‘We do not know how he was approached for the job. But on August 28, a car from the resort had come to pick him up. He was given a room in the resort. She lived there.

She was offered a salary of Rs 10000 per month for the job of receptionist. But where did we know that they would kill him before he got his first salary. She was eager to study further. We were disappointed when she had to give up her education to take care of the family.

But we also thought that maybe she would have a future in what she was doing. However, only a few weeks after she left, her mother told me that Ankita’s behavior had changed and it seemed that something was bothering her. We didn’t think much about it at that time. Maybe, we should have thought.

WhatsApp chat between Ankita and her friend Prominent evidence for the police, according to DGP Ashok Kumar, the police retrieved the WhatsApp chat between Ankita and a friend of hers living in Jammu. “In the message, she (Ankita) clarified that they (accused) want her to provide special services. His friend and WhatsApp chat are prime evidence for us. Apart from this, we found the body from the same canal (Shakti canal near Chila power house) in which the accused had confessed to pushing it.

According to police sources, in a WhatsApp chat, Ankita has mentioned that she was feeling unsafe at the resort and one of the accused allegedly asked her to provide ‘special services’ to a customer in exchange for Rs 10,000. PLC/GT