INVC NEWS New Delhi, Strongly emphasizing the need to address the root cause behind the man-animal conflict, Union Minister for Commerce &

Industry, Mr. Suresh Prabhu pointed out that the man-animal conflict is an existential crisis not for the animals, but for human beings.  Addressing a gathering to celebrate World Elephant Day today at Indira Gandhi Centre for National Arts here today, Mr. Prabhu said that there is an urgent need to explain this existential crisis to the human population.  He underlined the fact that protection of wilderness and forests is a must to protect any wildlife species.  The Minister stressed the urgent need to focus on human population to optimize conservation efforts.  He also acknowledged the supreme sacrifice of Late Dr. Manikandan and his family on the occasion. Speaking on the occasion, Director General of Forest and Special Secretary, Ministry of Environment, Forest and Climate Change, Dr. Siddhanta Das, said that in the quest for development, human intervention has fragmented habitats of elephants and destroyed forests, which in turn has led to the occurrence of man-animal conflict.  Dr. Das stated that elephants keep walking an eating for 18 hours in a day and defecate half-digested food, including grass, bamboo and leaves over a wide area, giving rise to another chain of events.  He averred that if elephants are confined to one place, nature’s linkage is broken.   In this context, Dr. Das pointed to the urgent need to protect the habitat and corridors of elephants. In a brief address, brand ambassador of Wildlife Trust of India, Ms. Dia Mirza said that the only way to involve more and more people in conservation efforts is to build a narrative of engagement.  Ms. Mirza expressed the hope that ‘Gaj Mahotsav’ will provide an opportunity to conservationists, policy-makers, people and particularly children, to come together to conserve and protect wildlife and elephants, in particular. Ministry of Environment, Forest and Climate Change, along with Wildlife Trust of India, kicked off the celebrations of ‘Gaj Mahotsav’ today.  The four-day ‘Gaj Mahotsav’ celebrations will continue till August 15, 2018.  ‘Gaj Mahotsav’ celebrations will include sessions on policy, art exhibitions, film shows, music and entertainment. A special area has been earmarked on the IGNCA lawns for the display and sale of elephant-themed products and produce from various NGOs that have been invited to showcase their work.   The 101 elephants displayed at IGNCA during Gaj Mahotsav symbolize the 101 elephant corridors that need to be protected. An award ceremony was also held to commemorate the World Elephant Day.  Mr. Suresh Prabhu conferred the “Best Elephant Warrior Award” to Late Dr. Manikandan.  The award was received by Mrs. Sangeeta Manikandan.  The award for making a significant contribution to the cause of conservation of Asian elephant was given to Mr. John Burton & Ms. Vivien Burton.  The efforts of Assam government in putting back 15 elephants into the wild were also acknowledged on the occasion.   Dr. Alka Pande, Mrs. Ina Puri, Ms. Anita Nair, Ms. Bulbul Sharma, Mr. Surendra Verma, Mr. Shantum Seth and Mr. Abhilash Khandekar were also felicitated for making wildlife conservation efforts. “Mere Desh Ki Zameen” – the “Wild Anthem” (see attached video link) composed by noted lyricist, Mr. Prasoon Joshi and sung by well-known singers, Ms. Shreya Ghoshal, Ms. Sunidhi Chauhan, Mr. Vishal Dadlani and Mr. Benny Dayal  was also released on the occasion. A presentation by the Ishara Puppet Theatre Trust, directed by Mr. Dadi Pudumjee, using specially created, colouful ‘Tolu Bomblatta shadow puppets’ from Andhra Pradesh was made before the gathering.  The presentation was created by Mr. S. Hanumantha Rao, Mr. S. Chidambara Rao, Mr. Khande Bhaskar Rao and Mr Kanday Anjanappa. The gathering on the occasion of World Elephant Day celebrations included policy makers, elephant experts/individuals, representatives of civil society, as well as school children.  Additional Director General of Forests, Mr M.S. Negi, Inspector General Forests and Director (Project Elephant), Mr. Noyal Thomas, ED & CEO, Wildlife Trust of India, Mr. Vivek Menon and President & CEO, International Fund for Animal Welfare, Mr. Azzedine Downes also addressed the gathering. 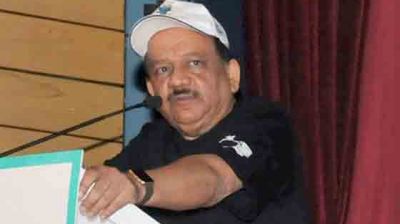 Efforts for elephant conservation must bring about a qualitative improvement...