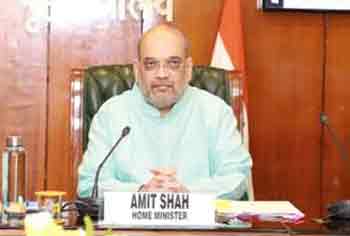 This will be his second visit to Kashmir after the abrogation of Article 370. Earlier, Shah had reached Pulwama and Srinagar last year. The Home Minister will review the latest situation in the anti-terror operation and security in the Valley, but his visit will be more politically significant amid the rumblings of elections.

BJP is exploring possibilities for itself in Kashmir. Recently, the nomination of Ghulam Ali in the Rajya Sabha was an important step in this episode.

Ghulam Ali comes from the Gurjar Muslim community. This community did not get much representation earlier. The BJP is eyeing other such neglected groups. Which have become very important after the delimitation. Sources said that several political developments are taking place in Kashmir. After resigning from Congress, Ghulam Nabi Azad has formed a new party.

They are also estimating their political understanding with the BJP. The Home Minister will reach Jammu on 30 September. He will address a rally in Rajouri district on October 1. During this, he will also take stock of the election preparations.

During this, the Home Minister will hold a rally in Baramulla and Rajouri in North Kashmir. It is being told that many big announcements can also be made in these rallies. Not only the people of North Kashmir but people from different districts of Kashmir are expected to attend the Home Minister’s rally to be held in Baramulla on October 2. PLC/GT