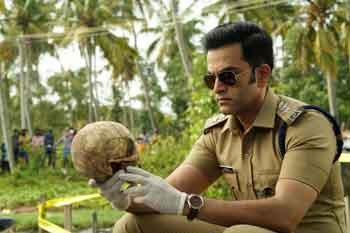 INVC NEWS
New Delhi,
Critically acclaimed actor-filmmaker Prithviraj Sukumaran will be seen in Amazon Prime Video’s upcoming Malayalam direct-to-service offering – ‘Cold Case’, and not only that the audience and his fans will be treated to yet another cop role by the actor.

Amazon Prime Video recently released a trailer of the investigative crime thriller, unveiling Prithviraj’s role, and we hear his fans are beyond excited! In Cold Case, we see the superstar as a cop inspecting a crime scene alongside a parallel paranormal track. The hybrid elements in the plot are something not seen in a film earlier. While in the past the superstar has portrayed the role of a uniformed hero (read a cop) with great finesse, with Cold Case we see Prithviraj in a slightly different and more serious persona. And we hear that his character in Cold Case will be something never seen before owing to the film’s hybrid genre and unique storyline.

Speaking about the role actor-filmmaker Prithviraj Sukumaran shares, “I’m really looking forward for audiences to watch Cold Case. Playing the role of a cop was different this time as all my earlier cop films were character based, but this one is plot based. When I heard the story, it was an immediate yes for me as this is a hybrid genre film that is really well-written. It has been a great learning experience for me as well!”

In the past, Prithviraj has played the cop’s role in movies like ‘Memories’, ‘Police Police’, ‘Mumbai Police’, ‘7th Day’ and ‘Raavanaa’, and emerged into one of the most loved on-screen cops. So, no wonder Prithviraj was the director Tanu Balak’s first choice for the lead role. Once the script writer Sreenath V Nath completed the script, the cinematographer turned director immediately approached the superstar, who immediately loved the uniqueness in the plot.

Cold Case is a riveting story of a complex murder case, the investigation of which is taken on by one of Trivandrum’s most brilliant officers – ACP Satyajith (Prithviraj Sukumaran). As Satyajith unravels several mysteries behind the murder, the case takes a rather ‘cold’ turn with emergence of supernatural forces in the case. Finding their way through parallel investigations ACP Satyajith and investigative journalist Medha Padmaja (Aditi Balan) eventually cross paths to unearth secrets they never imagined.

Produced by Anto Joseph Films and Plan J Studios, directed by Tanu Balak and written by Sreenath V Nath, the investigative crime thriller is all set for a global premiere on June 30th on Amazon Prime Video. Get ready for murder, mystery, and mayhem!

MX VDesi announces the blockbuster Korean-drama One the Woman