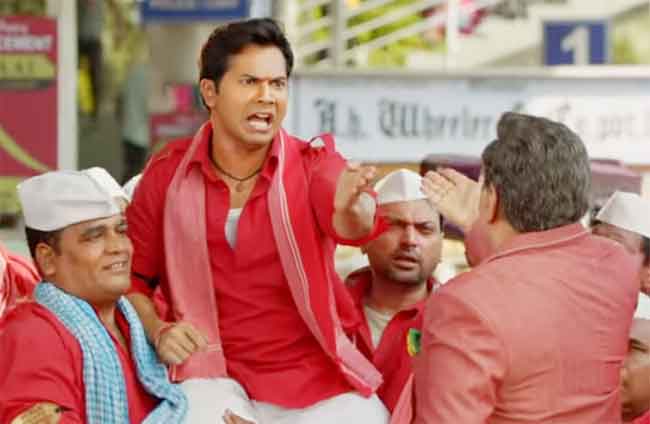 David Dhawan’s remake of the classic 1995 comedy Coolie No. 1 starring Varun Dhawan and Sara Ali Khan is all set to spread some festive cheer this Christmas on Amazon Prime Video across 200 countries and territories

Amazon Prime Video today unveiled the highly-anticipated trailer of Coolie No. 1 premiering exclusively on the streaming service. Directed by David Dhawan, (Judwaa, Partner)  the upcoming title is a rendition of the iconic 1995 Govinda-Karisma Kapoor starrer family comedy and stars Varun Dhawan (October, Street Dancer 3D) and Sara Ali Khan (Kedarnath, Simmba) in the lead along with Paresh Rawal, Javed Jaffrey, Johnny Lever, Rajpal Yadav amongst others and is produced by Vashu Bhagnani, Jackky Bhagnani and Deepshikha Deshmukh. Bringing festive cheer this Christmas, Coolie No. 1 will premiere exclusively on the 25th  of December, 2020 on Amazon Prime Video and will be available in 200 countries and territories worldwide.

“These are truly exciting times for Indian entertainment,” said Director, David Dhawan. “I am happy that our labour of love will be viewed by a global audience. Sara and Varun had big shoes to fill in and they have done a remarkable job. I’m looking forward to seeing the audience’s reaction to our film.”

"Our No 1 franchise has entertained generations for 25 years now. We started our journey of Pooja Entertainment with Coolie No 1 and it's wonderful to celebrate these decades with its remake with a young cast of incredible actors like Varun and Sara. We are excited about bringing Coolie No 1 to audiences across the world through Amazon Prime Video for them to enjoy the film from the safety and comfort of their homes." said Vashu Bhagnani, Producer, Pooja Entertainment.

“The response by customers towards our direct to service film releases has been truly encouraging and it only reiterates our endeavour to listen to our customers and work backwards from there,” said Vijay Subramaniam, Director and Head, Content, Amazon Prime Video, India. “We consistently strive to bring the very best content to our customer’s doorstep. Coolie No. 1 is one of the most eagerly awaited titles of the year marks the return of the much loved No.1 franchise. David Dhawan’s remake of the 90’s classic is a perfect family entertainer and a truly fitting way to end the year! We are delighted to present the film to our customers as a Christmas treat.”

“I have always loved the screenplay and the performances in the original Coolie No. 1. That's one of the reasons this adaptation of the classic is so special to me,” said actor Varun Dhawan, “The preparation for this role was a great ride. As an actor, the humour play was a lot of fun to do. I had a wonderful experience working with Sara, who is extremely talented. We had an amazing time shooting for this film across exciting locations. I am very happy that viewers across the world will be able to enjoy Christmas with Coolie No. 1 exclusively on Amazon Prime Video.”

Working on Coolie No. 1 has really been a dream come true. One has grown up listening to songs like Husn hai Suhana and Mirchi Lagi, and it’s surreal that I now feature in the reprised versions of these songs! Working with Varun was an amazing experience, as not only is he an impeccable actor but he is also an extremely considerate, helpful and motivating friend who always has your back on set. Of course, working with David Sir was a sheer privilege as I truly believe he’s the king of this commercial, masala, family comedy genre. Everyday on set was a riot of fun, while at the same time one got to learn so much just by watching actors like Paresh sir, Rajpal sir, Johnny Sir, Bharti Maam, Javed Sir and even Saahil and Shikha. I’m so grateful to Jackie and Vashu Sir for giving me this opportunity, and supporting us so much through this film! I really am excited for this film to release, and I sincerely hope that we’re able to spread happiness and some much-needed Christmas cheer with this movie” said actress Sara Ali Khan

After being insulted by a rich businessman named Rozario, pandit Jai Kishen teaches him a lesson by getting his daughter married to Raju - a Coolie posing as a millionaire. Soon Raju’s real identity is exposed but he cooks up a story of having a filthy rich twin. One lie leads to another and things start to go out of hand.

Director David Dhawan’s 45th entertainer, Coolie No.1 is a remake of the iconic movie that was released in 1995. It will fill your Christmas fun, humour and romance.