New Delhi , This is the month of love & crushes, romance & roses and the leading digital platform ALTBalaji, is set to spin your senses and take you back to your

high school days with its sassy tale of love, adoration, competition and friendship. This love month’s much-awaited web series, PuncchBeat streams now on ALTBalaji. The show’s stellar star cast comprising Priyank Sharma, Harshita Gaur, Siddharth Sharma and Khushi Joshi, were spotted promoting the show in the capital city, Delhi. The 13-episodes-series produced by mastermind Vikas Gupta is already streaming live on the ALTBalaji app. The story of PuncchBeat is a riveting take on high-school drama based on the students of Rosewood High Academy, one of the most prestigious schools in the country. Home ground of the elites, the school is popular for nurturing champions in fields like boxing and dancing and its disciplined ways. Famous for its heritage and disciplined ways, the new semester at Rosewood High looks to be one where rebels will be formed, and a lot of rules will be broken. Teen sensation Priyank Sharma and the charming Harshita Gaur, will play the lead, along with the debutants Siddharth Sharma and Khushi Joshi. The youth drama also sees industry veterans Sameer Soni and Niki Walia playing pivotal roles along with debutants Nikhil Bhambri, Sindhuja Turlapati, Krishna Kaul and Kajol Tyagi. Filled with romance, drama and a lot of fun, the latest offering has captured extremely riveting emotions and relationships that the particular age group goes through. The story revolves around two protagonists, Rahat (Priyank) and Ranbir (Siddharth), who understand the true meaning of friendship, love and family through their individual complicated journeys. The coming of age school drama between the two dives into the mayhem between two brothers, one legitimate and the other one a 'bastard' and how they realize that life is all about acceptance and finding one's identity. Witness this interesting game where family will come together or break apart! Speaking about the web series, producer and creator, Vikas Gupta says, “Excitement on the show has been at an all-time high ever since ALTBalaji announced the series followed by the trailer launch, prom night celebration and the college festival promotions. All of which has been possible due to the immense faith in our web series and I am sure that it will resonate with the younger generation today while giving a nostalgic feeling to the others. Everyone involved in the project has put their heart and soul in this and I am sure the audiences will love it.” Teenage sensation Priyank Sharma says, “I am so excited to be in my hometown for the promotion of PuncchBeat. A part of my childhood was spent in the city where Gulati’s used to be my favourite hangout joint. It’s a proud feeling to be standing here for the promotion of my new show and I am equally proud to be a part of PuncchBeat team. My character is very intense and under a lot of pressure, so playing such a character was slightly challenging for me. I am a fun loving person in real-life who keeps goofing around with people. Hence, preparing myself for a role like this and matching the wavelength with the character was a task. I learnt a lot while shooting and had a lot of fun with the whole cast. The series indeed is very special to us as it’s a debut project for almost all of us. I am glad I am in back in my hometown after a long time, Delhi is where I was born and brought up. It feels good to be here.” Promising a Valentine’s Day to remember, ALTBalaji packs a punch with its young and upbeat take on the young life; PuncchBeat. The wait is finally over, so happy streaming on ALTBalaji starting 14th February!!!
Read the full article
Tags: Priyank Sharma Khushi Joshi Harshita Gaur Siddharth Sharma 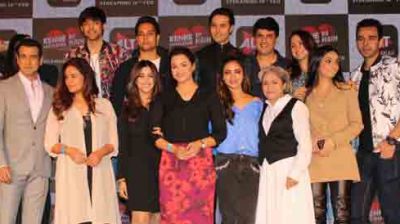