All international airports and sea ports will soon be fitted out with thermal scanners : Dr Harsh Vardhan

INVC, Delhi, India has put in place the same surveillance-tracking systems for checking the dreaded Ebola Virus Disease (EVD) which has succeeded in Nigeria leading to the African nation being declared “Ebola-Free” by World Health Organisation yesterday. Declaring this here today, Dr Harsh Vardhan, Union Health Minister, pointed out that India already has a highly rated integrated disease surveillance network. “We have removed all stops to constantly upgrade equipment and retrain staff and are in the process of further strengthening them,” he said. The Minister, who today took another meeting of officials of the Health Ministry, along with representatives of the Ministries of Defence, Civil Aviation, Home, Shipping, External Affairs, some state governments, the Indian Army, Navy and National Disaster Management Authority, said all international airports and sea ports will soon be fitted out with thermal scanners and other EVD detection equipment for 24x7 deployment. Officials of the World Health Organisation and United States Centre for Disease Control and Prevention were also present. The use of thermal scanners, which has made Nigeria’s success possible, is widely prevalent in most of the 15 major airports, often two to each. A further lot of scanners will be purchased and installed over the next few days at the Minister’s orders. Dr Harsh Vardhan said, “These scanners, which resemble the radar guns used by police officers to catch speeding motorists, can detect high body temperature among people queued up before immigration counters. Fever is one of the commonest symptoms of EVD. Our officials have already used thermal scanners when SARS broke out in south-east Asia some years back.” He pointed out that a guidance paper produced by the United States Centre for Disease Control and Prevention, Atlanta, has outlined all the facets of operating this hardware. “There is need for constant maintenance, frequent calibration and carrying out training of people using them,” the Minister said. Health authorities of New Delhi’s Indira Gandhi International Airport conducted a mock drill today to test out the alertness of the Ebola detection centre there. The Minister has instructed similar tests be carried out at all airports in the country within a few days and at regular intervals. The Minister took detailed reports from representatives of all the ministries and discussed ways to strengthen the systems. As of now there has not been a single case of an EVD patient arriving in India. A few people with high body temperature were quarantined and their blood samples sent to two designated laboratories in the country. Another 10 laboratories are being kept on standby in case of necessity. On being tested negative for EVD they were allowed to continue with their journey in the country albeit after leaving their future addresses with the authorities. They are tracked for the remainder of the incubation period of the virus (21 days). The Minister said India had prepared early. “We held our first meeting on Ebola in early June, whereas WHO declared an international emergency in the last week of August. Our officials got to work by updating their skills in managing detecting systems, disseminating information and preparing for all kinds of situations.” The government also opened a round-the-clock helpline to respond to people’s queries on Ebola. This has helped in disseminating information and spreading awareness among the people. The Minister pointed out the need for greater clarity must be sought from international airlines as to the steps that are taken when a passenger manifests signs of Ebola when the plane is air borne. Also, it is essential to ensure that passengers are given the self-declaration forms to fill out before they deplane. Representatives from the Indian Army who attended the meeting said that Indian Peace Keeping Force personnel stationed in the Democratic Republic of Congo and South Sudan are being treated on par with people living in Sierra Leone. They have been sensitized on the preventive steps and whenever a soldier or officer enters India, he is routed only through New Delhi. Dr Harsh Vardhan said, “We used a war-room approach to coordinate the outbreak response. Our strict procedures for screening all arrivals and communicating with the Indians living in the African continent are in tune with international standards.” The Minister has however warned against complacency. “If a single case of Ebola is detected, we must have systems in place to treat such a patient. Therefore it is important to carry out training programmes in all district hospitals across the country.” 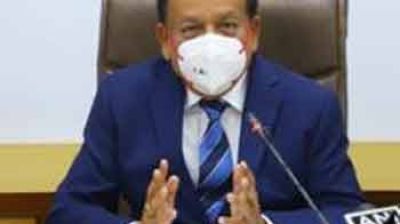