Home International All citizen have equal rights under the constitution irrespective of their caste,... 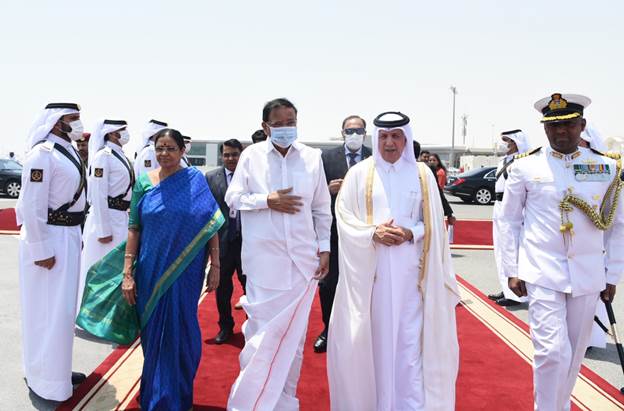 The Vice President’s 9-day tour of Gabon, Senegal and Qatar successfully concluded today, with Shri Naidu returning to India later in the evening. While the Vice President’s tour to Gabon and Senegal were the first high level visits from India, his visit to Qatar was the first by any Indian Vice President. During the visits, he had wide ranging discussions with top leadership in each country. Shri Naidu also interacted with the business fraternity and the Indian community in all three countries at receptions held in his honour in the capital cities of Libreville, Dakar and Doha. The Vice President emplaning in Doha, Qatar for his return journey to Delhi on completion of his three-nation tour on June 7, 2022

The Vice President addressed the Indian diaspora community in Qatar in Doha yesterday. Lauding them for their achievements, Shri Naidu said that the Qatari leadership he had met during the visit had an extremely positive the Indian community and valued their significant contribution to the country’s development. He said the “the 7.80 lakh strong Indian community in Qatar is a living bridge between the two countries”.

Shri Naidu observed that there has been a deepening of the relations between India and Qatar, pointing out to the highest ever bilateral trade of over US$ 15 billion last year. He also noted that over 50 wholly-owned Indian companies are located in Qatar in diverse fields such as infrastructure, information technology, and energy and the 15,000 jointly owned companies are adding momentum to the India-Qatar economic partnership.

Noting that India and Qatar will mark the 50th anniversary of establishing full diplomatic relations next year, Shri Naidu said that “the countries are building a “comprehensive energy partnership. Cooperation between India and Qatar is also expanding in defence, security, healthcare and education sectors”. He further recalled that both sides agreed in principle to establish an Indian Chair at Qatar University and to pursue cooperation in the fields of sports and culture. He also referred to the launch of a start-up bridge between India and Qatar the previous day as an instance of the growing ties between the countries. 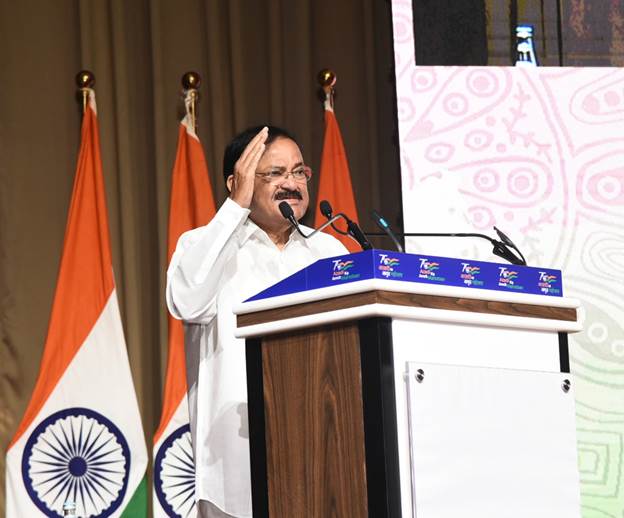 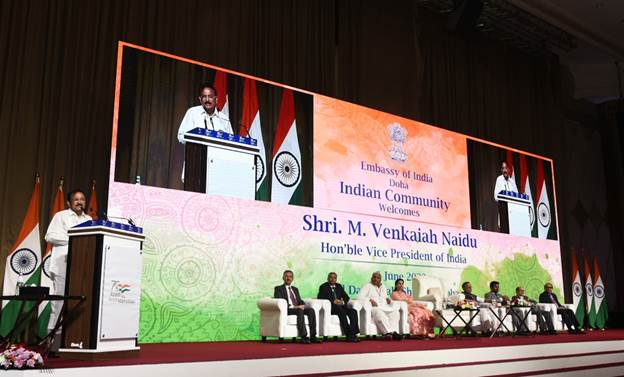 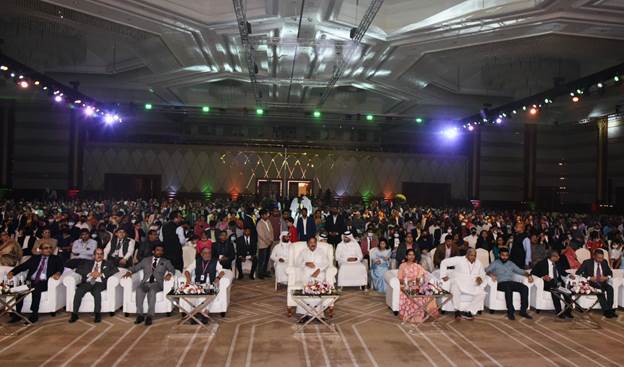 The Vice President highlighted various achievements of the Indian government in the recent past – in managing the COVID pandemic and supplying vaccines to the world, in building infrastructure and connectivity, in providing health and welfare to the poor, in the field of sustainable development – among other initiatives. He highlighted that the “government is integrating technology at its core for the welfare of the people and making it people-centric to transform governance and delivery of services”.

Referring to the diversity in India, the Vice President said that Indian must feel proud of the fact that India is the largest democracy in the world and all citizen have equal rights under the constitution irrespective of their caste, creed, religion or region.

Shri Naidu called upon the diaspora community to participate in the India growth story and “maintain a link with the Janma Bhoomi”. In his message to the Indian youth going abroad, the Vice President asked them to ‘learn, earn and return’ to share prosperity with their motherland. “Each of you can contribute to the rapid socio-economic development and transformation happening in India. We can immensely gain from the skills and talents of the diaspora. Explore how you can also join in the national efforts to make a difference in the lives of fellow Indians”, he said. He also wanted the Indians living abroad to preserve and protect their mother tongue.

Reassuring the community that the Indian government is strengthening links with the diaspora and takes care of Indians anywhere in the world, he said “your strength is India’s strength, and India’s power is your power”. He gave the instances of Vande Bharat Mission, Operation Ganga, Operation Devi Shakti as examples of India’s successful expatriation efforts even in difficult circumstances.

Shri Naidu applauded the efforts of all Indian diaspora, saying “the success of each one of you and other members of the overseas Indian family has dramatically changed the world’s perception of Indians and India”. Stating that India today is known for innovation, incubation and out of box ideas, Shri Naidu said that our youth are doing very well in these areas and the whole world is looking up to them.

Emphasising that peace is prerequisite for progress, Shri Naidu wanted each country to shun violence and look at each other with respect. Our ultimate aim is to bring happiness in the lives of the people, he said.

Indian civilisation stands for the universal values of unity, peace and social harmony