All adoption cases must be disposed of at the earliest and in any event not later than two months from the date of filing the application : Maneka Gandhi

INVC,
Delhi,
Union Minister of Women & Child Development, Smt Maneka Sanjay Gandhi has written nearly 700 letters to Chief Justices of High Courts and District Judges all across the country, requesting them to expedite the adoption cases pending with them or received by them. The Minister has pointed out that the adoption cases are pending in various Courts for long time resulting in delay in the legal transfer of the child to the adoptive family, while the children continue to languish in the children’s homes. Referring to the direction of the Apex Court in its judgement dated 27th September, 1985 (para 16), in the matter of L. K Pandey vs Union of India & Ors, Mrs Maneka Gandhi has said that all adoption cases must be disposed of at the earliest and in any event not later than two months from the date of filing the application. The Minister has also requested the judges to ensure that adoption proceedings are held ‘ín camera’ as directed by the Apex Court vide its judgement dated 6th February, 1984(para 22) in the matter of L.K Pandey vs Union of India and Ors. Additionally, the District Courts/Civil Courts dealing with adoption matters are required to give compliance reports from time to time to track the progress of adoption cases.
Read the full article
Tags: invc Maneka Gandhi Maneka Sanjay Gandhi Union Minister of Women & Child Development judges to expedite adoption cases pending adoption cases 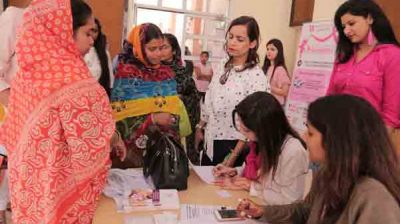 Laudable efforts by CUTS on child protection and women’s empowerment

Now the thrust should be to move faster

Good For Women. Good For India. Good for You.