Home Other Indian State News Aadhaar News : Aadhaar has played a crucial role once again in... 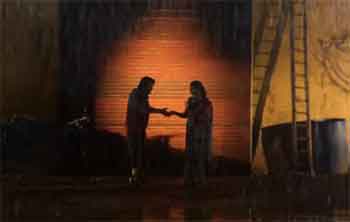 INVC NEWS
New Delhi ,
Aadhaar has played a crucial role once again in uniting the lost member of a family. This time a 21-year old specially-abled young man was united with his family after missing for six years.

Considered missing since November 2016 from Khagaria district of Bihar, the disabled man (deaf and dumb) was traced via Aadhaar in Nagpur, Maharashtra in August 2022. There is growing evidence on how Aadhaar is enabling ease of living not just as a digital backbone for welfare service delivery, but also helping families get reunited with missing members.

A missing child aged 15 years was found at Nagpur Railway Station on 28 Nov 2016. Since the child was specially abled, with speech and hearing impairments (deaf and dumb), Railway authorities after due process handed him over to Government Senior Boys Orphanage in Nagpur. He was given a name called Prem Ramesh Ingale.

Vinod Daberao, Superintendent of the orphanage and the counselor visited Aadhaar Seva Kendra (ASK) in Nagpur in July 2022 for Aadhaar registration of ‘Prem Ramesh Ingale’. But the Aadhaar could not be generated against this enrolment as the biometrics were matching with another exiting Aadhaar number.

Following which ASK Nagpur approached UIDAI regional office Mumbai. On verification it emerged that the concerned young man has an existing Aadhaar, since 2016 with the name called Sochan Kumar having address of a locality in Khagaria district of Bihar.

After further scrutiny and verifications, and following the due procedure, authorities disclosed the identity of the young man to the superintendent of the orphanage. With cooperation from the local police in Khagaria (Bihar), the family was informed.

Subsequently the mother and four relatives of the young man arrived in Nagpur with requisite documents from concerned Police authorities, and their village ‘Sarpanch’ in the third week of August.

The case has once again proved prowess of Aadhaar platform. Mr. Sachin Kumar is now re-united with his family, mainly due to the Aadhaar.

Handing over procedure of the child, as per rule of the Child Welfare Committee, and direction of the Honourable Court, have been legally completed, jointly by the Superintendent and the counselor of the orphanage.

How many times you can make changes in Aadhaar Card, know the complete details

It is necessary for everyone to link Aadhaar with PAN card by March 31, 2023, otherwise it will be a big problem