Home Health A breakthrough surgical treatment at Medica offers hope to a patient on... 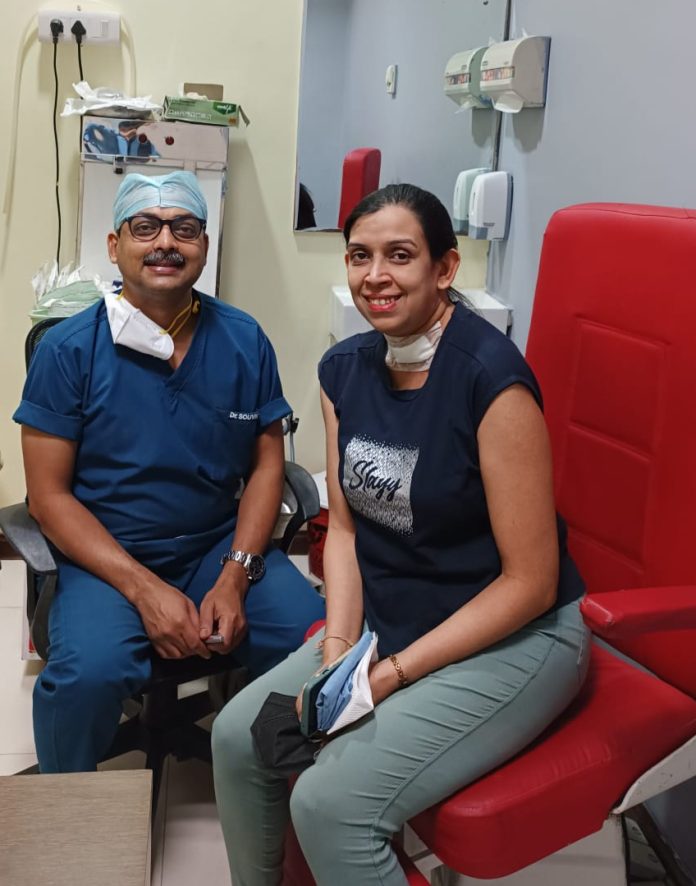 INVC NEWS
Mumbai,
Medica Group of Hospitals, the largest private hospital chain in Eastern India, at its flagship facility Medica Superspecialty Hospital in Kolkata conducted a successful Thyroplasty Surgery for the first time on a 44-year-old female from Kolkata. Thyroplasty is a procedure performed to change the position of the vocal cord.  This is usually performed to improve a patient’s voice and ability to cough. The team of experienced doctors from the ENT department and the care team of Medica joined hands together for this first-time case in Medica. The team put in their combined efforts under the leadership of Dr. Souvik Roy Choudhury, Consultant ENT and Head Neck Surgeon, Medica Superspecialty Hospital along with the care team of Medica including, Dr. Mumtaz Afzal, Anesthesiologist, &, Dr. Akshay Gadre, Anesthesiologist ensured to achieve this momentous feat on 6th September 2022.

Ms. Rishiparna Roy, a 44-year-old Senior IT Professional based in Bangalore but residing in Kolkata, had developed a broken voice since November 2021. She sought medical attention to determine the cause of her broken voice, and after additional examination, she was diagnosed with left vocal cord palsy – a condition in which the left vocal cords cannot move or move slowly which makes it hard for a person to speak and even breathe. She began voice therapy immediately and was receiving cautious treatment. While things were improving, in May 2022, she underwent an abdominal surgical procedure, which led her to discontinue her voice therapy and immediately things worsened severely.

In June 2022, when she first came to Dr. Souvik Roy Choudhury for diagnosis at Medica, she was out of breath and unable to speak; she had to pause numerous times before delivering a single sentence. Her entire career was jeopardized because she lacked self-confidence and struggled to focus on her daily responsibilities at home and at work. She was disheartened for not being able to attend office meetings or interact with others properly and was on the verge of quitting her job. Looking at her distressful condition, she was re-evaluated immediately and diagnosed with complete left cord palsy with a paramedian cord position, which signified that her vocal cord was 1.5 mm away from the midline. There was a balanced movement of her right vocal cord, but a large phonatory gap, which occurs when the vocal cords fail to close during the production of vocal sound or speech, remained, resulting in a breathy voice. A CT scan of the neck and thorax (between the neck and the abdomen) was performed instantly, revealing a normal study outcome. Since her symptoms had lasted more than 6 months, she was given the option of undergoing a Thyroplasty treatment to rectify the position of her vocal cords and she agreed. The patient was thoroughly briefed about the advantages and disadvantages of surgical outcomes.

The surgery was performed on September 6, 2022, under local anesthesia with mild sedation. A small incision on the neck was made to expose the Thyroid Cartilage and identify the voice box, and then a small rectangular-shaped window was cut into the larynx to permanently implant a silastic block – a silicone block for use in the expansion of the bone or cartilaginous features. The desired outcome was obtained by Fibre Optic Laryngoscopy, a diagnostic test that uses a thin tube with a light source and camera attached at its tip to help the doctor inspect your throat for problems, and communication with the Patient. Her Maximum Phonation Time (MPT) which was 2.13 seconds before the surgery, became 14 seconds immediately after surgery, and she was completing a sentence without pause.

Dr. Souvik Roy Choudhury, who led the operation, said, “When Ms. Roy first visited Medica, her voice was almost impossible to understand. Since our objective was to give her a nearly normal & understandable voice so she could speak without pause, we advised her for Thyroplasty. Throughout the procedure, our expert anaesthesiologist took total control of the situation and ensured that everything went well. She was given a normal diet three hours after surgery. The recovery was very smooth, with no or minimal swelling and soreness that subsided the next day, after which she was discharged from the hospital. The voice was quite satisfactory after 5 days, and the fibre optic evaluation revealed a nearly complete approximation of the vocal cords with a minimal phonatory gap.”

The entire surgical procedure not only assisted Ms. Roy in reviving her voice but also helped her from quitting her job. She resumed work within a week following her surgery. She is now a lot more at ease speaking with coworkers and attending meetings.