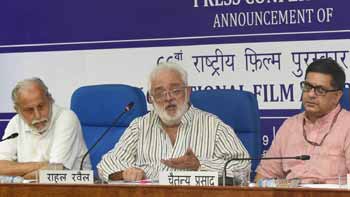 Ayushman Khurana and Vicky Kaushal jointly won Best Actor Award for their performances in ‘Andhadhun’ and ‘Uri: The Surgical Strike’, while Keerthy Suresh was declared winner of Best Actress trophy for her performance in Telugu movie ‘Mahanati’. Aditya Dhar won Best Director Award for ‘Uri: The Surgical Strike’. Marathi movie Naal got the Indira Gandhi Award for Best Debut Film of a Director.  Uttarakhand was declared the Most Film Friendly State.

Award for Most Film Friendly State

The Jury unanimously conferred the award for the Most Film Friendly State to the State of Uttarakhand for furthering the growth of the film industry in the State including creating an environment for ease of filming in the State, encouraging skill/talent development, incentivizing the re-opening of closed cinema halls, formation of film development fund, continuing with the earlier incentive plan for filming, formation of Utttarakhand Film Development Council among other pro-active initiatives.

The Committee noted that the amendment of the Uttarakhand Film Policy as per office memorandum/ communication date 6th February 2019 clearly highlights the above-mentioned initiatives. It also noted that the State was in the process of setting up a dedicated web portal www.udfc.gov.in for online submission for seeking permissions, payments and approvals etc. and has done away with the levy of any shooting charges.

The details of the jury member, number of entries received etc is presented below.

Awards are given in 31 different categories each year.  In the Feature Films category, 419 Films were received this year. After 45 days of film screening, the eminent Jury, constituted by Ministry of I&B, selected films under various categories. The list of Jury members, along with their short Biography is as follows:

Rahul Rawail (Chairman of Central Panel)- Rahul Rawail is a well-known film director whose work spans over three decades and includes 17 feature films and two TV series.
Raj Dutt (Member of Central Panel)- Rajdutt is a director and actor, known for Aaj Jhale Mukt Mi(1986), Madhuchandra (1967) and Varhadi Ani Vajantri (1973).
Sabyasachi mohapatra (Member of Central Panel)- Dr. Sabyasachi Mohapatra is one of the acclaimed filmmakers from Odisha. He has been a Jury Member for National Film Award, Oscar Selection Committee of India and Indian Panorama.
Vasu Kolli (Member)- K Vasu is a Film director, writer and producer with 42 years of experience in regional cinema.
Archana R. Singh (Member)- Prof.Archana R Singh is Chairperson of the School of Communication Studies, Panjab University, Chandigarh.
Vijaya Krishnan (Member)-  Vijay Krishnan is a Film maker, film historian, novelist and short story teller. His films have won many awards and were selected to various international film festivals
Major Ravi (Member): Major Ravi is an Indian filmmaker and actor in Malayalam cinema. He also served as a Major in the Indian Army.
Imo Singh (Member): Imo Singh is has directed various Films, including short films for television, documentaries. He is also a member of the Film and Television Institute Society.
Vinod Ganatra (Member): Vinod Ganatra is a filmmaker known for Harun-Arun. His DEBUT feature film HEDA-HODA (BLIND CAMEL) travelled about 58 International Film Festivals world over and won many Awards.
B.S. Lingadevaru (Member): A Pharmacist hails from an agricultural-trading family in Karnataka. He is a well-known actor, producer and director of the small screen.
Ashok Rane (Member): Ashok Rane is a film society activist, film critic, historian, film teacher, writer and director.

Major Ravi (Chairman)- Major Ravi is an Indian filmmaker and actor in Malayalam cinema. He also served as a Major in the Indian Army.
Kuldeep Sinha (Member)-  Kuldeep Sinha is a national award winning filmmaker. . He has Three anthologies to his credit
Rahul Solapurkar (Member)-  Rahul Solapurkar is an actor, known for Hanan (2004), Vajra (2017) and Ek Ratra Manterleli (1989).
Ashok Sharan (Member)- Ashok Sharan is an advisory panel member of the Central Board of Film Certification (CBFC).
Devendra Khandelwal (Member)- Devendra Khandelwal is well known in the film and  television industry as a talented producer- director of international repute.

Ashok Rane (Chairman)- Ashok Rane is a film society activist, film critic, historian, film teacher, writer and director.
Dr. B. Diwaker(Member)
A. Karthik Raaja (Member)-  A. Karthik Raaja  is a cinematographer Worked for more than 40 films with reputed directors in the film industry.
Jayaram  (Member)-  Jayaram Kailas is an Indian film director and ad maker.
Shailesh Gupta (Member)-  Shailesh Gupta is a Director & a Director of Photography. He has passed out from the Film & Television Institute of India (FTII). He has a Production House, ‘Shadows & Whispers’ based out of Mumbai & Delhi.

Imo Singh (Chairman)-  Imo Singh is has directed various Films, including short films for television, documentaries. He is also a member of the Film and Television Institute Society
Malti Sahay (Member)- Malti Sahai is the former Director Directorate of film festivals where she served for 20 years.
She has written three books on Indian Cinema.she have been covering the International film festivals like Cannes Montreal Toronto for 20 years initially for U.N.I. and lately for ‘The Sentinel’.
MK Bhaskara Rao(Member)
S.M Patil Member)- – S.M Patil is a kannadaFilm Director, Script & lyrics Writer, journalist.
B Ramani(Member)- Balabhadrapatruni Ramani is a Telugu novelist, story writer and movie story-screenplay writer.

Vinod Ganatra (Chairman)- Vinod Ganatra is a filmmaker known for Harun-Arun. His DEBUT feature film HEDA-HODA (BLIND CAMEL) travelled about 58 International Film Festivals world over and won many Awards.
Monalisa Mukherjee (Member)- Monalisa Mukherjee is a film producer and director based in Mumbai.
Namasrri (Member)- Namasrri  is a Kannada actress and producer.She is founder of “NEWLUKCINEMA “ production company.
Akashaditya Lama (Member): Akashaditya lama is an Indian film director and scriptwriter based in Mumbai.
Suraj Kumar Duwarah (Member):  Suraj Duwarah is a cinematographer based in Guwahati,Assam .

B.S. Lingadevaru (Chairman)- B.S. Lingadevaru – A Pharmacist, hails from an agricultural-trading family in Karnataka. He is a well-known actor, producer and director of the small screen.
Gyan Sahay (Member)- Gyan Sahay is a Film Institute (Pune) graduate specializing in Cinematography. He is known for his works on Television.
Mahendra Teredesai (Member)- Mahendra Teredesai is a screenwriter and director known for his film ‘Dombivli Return’ which he directed in 2014
Parag Chhapekar (Member)- Parag Chhapekar is Editor for Entertainment at  Dainik Jagran.com. Earlier he has worked several media house like IBN 7, Zee News, Star News and India TV as Entertainment Head.
Neeraj Pathak (Member)-  Hailing from Ahmedabad in Gujarat, Neerraj Pathak. He is a screenwriter known for the movie ‘Pardes’.

Non- Feature Film category gives out Awards in 23 Categories. A total of 256 movies were received in the Non-feature Category this year. After screening of Films for 28 days, the eminent Jury constituted by Ministry of I&B, selected films under various categories.  The name of Jury members, along with their short Biography is as follows:

A.S Kanal (Chairman): A graduate of FTII, A S Kanal has worked as a cinematographer for many ads, films, documentaries and TV programmes. He has also worked as a teacher of cinematography at FTII.
Dhvani Desai (Member)- Dhvani Desai is a Mumbai based, International and Indian award winning animation filmmaker, curator and a poet, and in the animation field since more than 27 years.
Rajendra Mohapatra (Member)-  Rajendra Mohapatra A first batch of non-linear editors,efficient in all formats and platforms, with a career spanning 21years ,edited more than 500 corporate,short&feature films,documentariesand  2000 episode of TV Serials.
Chetan Mathur (Member)- Chetan Mathur is a Film maker, Writer, Director, Journalist & Educationist.Written & Directed over 500 Documentaries, Travelogues, Advertisement films, Promos & Short films.
B.R Srivatsa (Member) – Srivatsa B. R is an accredited photographer for over 3 decades and has worked with various national and international corporate leaders and organizations. He has a keen interest in Cinema.
Vandana Kohli (Member): Vandana Kohli is a filmmaker, musician and writer. She is also the Board of Governors for the National Institute of Fashion Technology (NIFT).
Atul Gangawar (Member): Atul Gangawar is a Producer-Writer-Director and member of FILM WRITERS ASSOCIATION (MUMBAI) and INDIAN FILM AND TELEVISION DIRECTORS ASSOCIATION (MUMBAI)

Utpal Borpujari (Chairman):  Utpal Borpujari is a National Film Award winning film critic and filmmaker. He won national award for his debut feature film 'Ishu'.
Mohan Raman- He made his debut in the 1991 Tamil film Idayam. Raman is one of the most popular character actors in television and has done more than 6000 television episodes on the series Chinna Pappa Periya Pappa.
Yatindra Mishra: Yatindra Mishra is an Indian poet, editor, music and cinema scholar.

An eminent jury chaired by acclaimed filmmaker Shri Ramesh Sippy comprising of renowned filmmaker Shri Vivek Agnihotri, and Shri Uday Singh, India Representative, Motion Picture Association of America, recommended the recipient of the Ministry of Information & Broadcasting’s prestigious award namely, the Most Film FriendlyState (MFFS) Award 2018. The MFFS Award is executed by the Film Facilitation Office (FFO) of the Ministry of I&B on behalf of the Ministry, and is being given under the aegis of the National Film Awards.