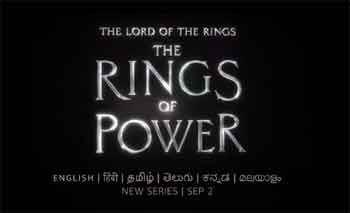 Creators of The Lord of the Rings: The Rings of Power have figured the entire series to the T! It’s about two months for the prequel of the legendary film trilogy to hit the screens on September 2. Set in the Second Age, the series has a completely unique worldbuilding that has got all Tolkien fans obsessed. Adding on to that excitement are showrunners JD Payne and Patrick McKay who confirmed that the series will have five seasons. Moreover, they’ve also figured out the last shot of the series finale.

“The rights that Amazon bought were for a 50-hour show. They knew from the beginning that was the size of the canvas – this was a big story with a clear beginning, middle, and end. There are things in the first season that don’t pay off until Season 5. We even know what our final shot of the last episode is going to be,” shared JD Payne.

Over the five seasons, The Lord of the Rings: The Rings of Power will build a surprising narrative set in the Second Age, where Elves, Dwarves, Harfoots and others exist in a world carved ahead of The Hobbit and Tolkien’s ‘The Lord of the Rings’. Using the backdrop that the legendary author has outlined, the series makers have told the story of the Second Age for the first time. “We’re doing what Tolkien wanted. As long as we felt like every invention of ours was true to his essence, we knew we were on the right track,” Payne said.

The Lord of the Rings: The Rings of Power explores an era that begins rather peacefully and captures all significant events in Middle-earth. In India, the series will release in six languages including English, Hindi, Tamil, Telugu, Malayalam, and Kannada on Amazon Prime Video in 240+ countries and territories worldwide.

It will make viewers feel like they’re on the screen with us : Markella Kavenagh