Home Other Indian State News 40 lakh Indians died during the corona virus epidemic due to the... 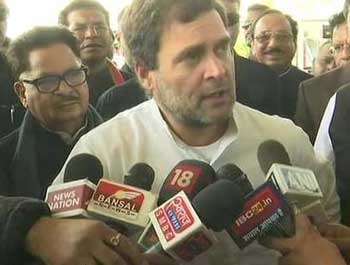 Rahul Gandhi claimed that due to the negligence of the government, 40 lakh Indians died during the corona virus epidemic. At the same time, he once again demanded a compensation of Rs 4 lakh each to the families of all the deceased. Rahul shared a screenshot on Twitter, which claimed that India is obstructing the World Health Organization’s efforts to make public the worldwide data on Kovid deaths.

The former Congress President said in a tweet that Modi ji neither speaks the truth, nor does he allow him to speak. They still lie that no one died due to lack of oxygen! Rahul said that I had said earlier also – due to the negligence of the government during Kovid, not five lakh but 40 lakh Indians have died.

He said that do your duty, Modi ji – give a compensation of Rs 4 lakh to every victim’s family. It is noteworthy that India on Saturday questioned the World Health Organization’s methodology for estimating the Kovid-19 mortality rate in the country. The government had said that such mathematical models cannot be used to estimate the death toll in a country with such a vast geographical size and population.

The Union Health Ministry said this in response to a New York Times article titled ‘India obstructing WHO’s effort to make global COVID death toll public’, published on April 16. The ministry said the country has expressed its concerns several times over the methodology being adopted by the World Health Organisation. PLC &GT

Should children receive Respiratory vaccines during and Post COVID?