International Superstar Freida Pinto who plays the role of the protagonist of the movie ‘Trishna’ has said that ‘Trishna’ is a film which is really close to her heart and she found it emotionally satisfying to be associated with the movie. She said that the storyline gave her an opportunity to discover her acting skills and also an opportunity to explore her limits as an actor. She was addressing a joint press conference on the movie today with the director of the film Mr. Michael Winterbottom. The Press Conference had the leading actress and the director of the movie interacting with the media about the film, the idea behind it, the making of the film and its presentation. Director Mr. Michael Winterbottom said that the movie was based on Thomas Hardy’s classic novel “Tess of the D’urbervilles” and told the story of a woman whose life was destroyed by a combination of love and circumstances. He stated that for this role, he chose Freida as she represents a classic Indian woman with contemporary sensibilities. He felt that nobody could have played the role of ‘Trishna’ as perfectly as Freida did and he was really happy that she had been a part of the project. Speaking about her future projects, Freida Pinto said that a few of her projects were in the pipeline which she was currently working on. She looked forward to work in more India-centric projects and said that she would love to represent her country in projects which reveal the true identity of India on the international scale. ‘Trishna’ is a British drama film directed by Michael Winterbottom, starring Freida Pinto and Riz Ahmed which is set in contemporary Rajasthan. 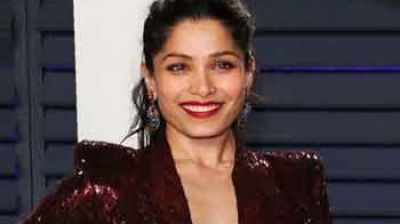 47th International Film Festival of India is going to witness...